Paul Douglas (Paul Douglas Fleischer, 1907-1959) was memorably cast as a cuckolded husband in Fritz Lang’s adaptation of Clifford Odets’ Clash by Night (1952), in which Robert Ryan beat his time with Barbara Stanwyck. Douglas — middle-aged, large, ungainly — was well cast in such roles. But I think it also makes a telling representation for what happened with his career. Douglas’s best parts were appropriated by others. He was the original Harry Brock in the Broadway version of Garson Kanin’s Born Yesterday (1949-50); the part went to Broderick Crawford in the 1950 movie version. His other big Broadway role was the lead in A Hole in the Head (1957). Frank Sinatra played that part in the 1959 movie, directed by Frank Capra. And what was perhaps his best known screen-role, the foul-mouthed baseball manager in the original Angels in the Outfield (1951) was later played by Danny Glover in the 1994 remake, which is probably better known today. 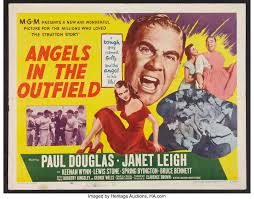 It’s a shame he has fallen by the wayside, for Douglas was perfect for certain things. If he had lived to be a hundred, he could have worked every day of his life, for there are always sympathetic “big lug” roles, and only a few smart, talented actors to play them. A Philly native, Douglas participated in drama while a a student at Yale. He began his professional life as a radio announcer (he had a terrific voice), initially in his native city. By the mid ’30s he was working out of New York, and hosting national network programs. Broadway fame brought him to Hollywood in 1949, where he made an immediate splash in three movies: A Letter to Three Wives, It Happens Every Spring (his first baseball comedy), and Nunnally Johnson’s Everybody Does It. This was followed by The Big Lift (1950), a drama with Montgomery Clift about the Berlin airlift, and the Elia Kazan pandemic thriller Panic in the Streets. Douglas was part of the all-star ensemble in the multiple Oscar winning melodrama Executive Suite (1954), and was reunited with Born Yesterday co-star in the 1956 screen adaptation of George S. Kaufman’s The Solid Gold Cadillac. That same year he also got to star in a TV movie version of Born Yesterday, with Mary Martin in Holiday’s role. In 1957 he appeared with Bob Hope in Beau James. His last film was the George Marshall comedy The Mating Game (1959) with Debbie Reynolds and Tony Randall.

Douglas was a muse to many auteurs, and a couple of planned performances were spoiled by Douglas’s final illness and death. His last performance was in a Twilight Zone episode which Rod Serling had crafted around his baseball persona from It Happens Every Spring and Angels in the Outfield. (Douglas had actually announced World Series games in his radio days; he was very much associated with the sport.) Douglas was visibly failing during the shoot. The footage was posthumously scrapped and he as replaced in his role by Jack Warden. And Billy Wilder wanted him for the Fred MacMurray part in The Apartment (1960), which might have been similar to his performance in Executive Suite. But in 1959, Paul Douglas, that overweight pitch man for Chesterfields, died of a massive heart attack.