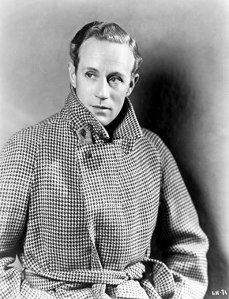 I used great deliberation in titling this memoriam to actor Leslie Howard (Leslie Howard Steiner, 1893-1943). We tend to remember him for one thing, his most famous role, but it’s a practical certainty he’d much rather have been remembered for the noble manner of his death — and who was responsible for it.

Howard’s father was a Hungarian Jew, his mother 1/4 German Jew. Born in London, he worked initially as a bank clerk and began his acting career just prior to the First World War. He served in the British army for several months, then was discharged for being diagnosed with neurasthenia, a now largely discarded medical concept that combined elements of depression and anxiety and the physical symptoms that go with them. In 1916 and 1917 he appeared in touring productions of Peg o’ My Heart and Charley’s Aunt, and then began acting regularly in West End productions in early 1918. By 1920 such was his fame and popularity that he transplanted it to Broadway in Just Suppose, and launched his own silent film production company, Minerva Films, in collaboration withe Adrian Brunel, C. Aubrey Smith, A.A. Milne and others. While the film venture was short-lived, his Broadway fame was not — he starred in over two dozen productions there through 1936.

Outward Bound (1930) was the first of several of his Broadway hits to be transferred to Hollywood (the play had premiered in 1924.) The others were Berkeley Square (1929>1933); The Animal Kingdom (1932), and The Petrified Forest (1935>1936). The latter vehicle is credited with making a star out of Humphrey Bogart, who, in gratitude, name his son after Howard.

Howard has often been called a matinee idol, and I confess to being one of the millions of heterosexual men who find themselves perplexed by that status. He strikes me as a fine actor, plain but not hideous, sensitive and gentle, and a little posh. In short, he’s no Errol Flynn, but women go into raptures over him. They want to wrap him in swaddling clothes. But I think they also suspect, correctly, that he was also a dawg who loved to exploit that. Once you wrapped him up and brought him home, he’d creep out of his blanket and go all Casanova on you. That’s my theory of the case, anyway, as an outsider. His magnetism eludes me, but he was a monster success on stage, screen , and radio. His magic worked on somebody. In addition to his millions of adoring throngs, Howard is believed to have had extramarital affairs with leading ladies Tallulah Bankhead, Merle Oberon, Norma Shearer, Myrna Loy, and Conchita Montenegro. From 1938 through 1942, he had a long-term extramarital lover named Violette Cunnington, who acted sometimes under the name Suzanne Clair.

In addition to the films already mentioned, Howard’s other screen successes included Smilin’ Through (1932), Of Human Bondage (1934), The Scarlet Pimpernel (1934), a rather preposterous Romeo and Juliet (1936) with Norma Shearer for which he was twice too old, and Shaw’s Pygmalion (1938) with Wendy Hiller. Fans of Gone with the Wind (1939) may be shocked to know that he hated the role of Ashley Wilkes, seemingly for the very reason audiences like him in it — he was so well cast in the part. One can understand why he might prefer not to be presented as melancholy and dreamy and too good for this earth in an age when “men were men”. At any rate, he only agreed to take the role if he could appear opposite Ingrid Bergman in the American version of Intermezzo (1939), her American debut. His last Broadway stage role was Hamlet (1936).

1939 found the U.K. at war with the Axis Powers, and the 47-year old Howard took the occasion to return to England and do his part for his home country. Too old to enlist, he was persuaded to do his bit as a propagandist, making such films as Pimpernel Smith (1941), 49th Parallel (1941), Spitfire (1942), and Noel Coward and David Lean’s In Which We Serve (1943). In 1943 he embarked on a speaking tour of Spain and Portugal (both officially neutral countries) to drum up support for the Allies. He was returning to England from Lisbon when his plane was shot down by the Luftwaffe over the Bay of Biscay. Whether he was the intended target or not has been the subject for speculation for decades. In any case, I think you’ll agree that it was a brave and heroic death, with nothing of the Shrinking Violet about it.

To learn more about show business history, please see No Applause, Just Throw Money: The Book That Made Vaudeville Famous, and for more on silent film please read Chain of Fools: Silent Comedy and Its Legacies from Nickelodeons to Youtube.