In honor of Tennessee Williams’ birthday, we append this little sidebar to the massive tribute we wrote to the playwright here. Our conceit lies in the observation that in the thick of Williams’ hot streak in the 1950s, once his Broadway success was transplanted to Hollywood with the films The Glass Menagerie, A Streetcar Named Desire, The Rose Tattoo, and Baby Doll (with several others in the pipeline) producers sought to replicate his successful formula of sultry, tawdry sex stories in Southern settings with similar properties by other authors. It is an interesting little phenomenon, as some of the literary sources predate Williams but were shoehorned into his style, and others were by equally major writers who found imitating him irresistible. I imagine I’ll add to this list as time goes on, but here’s a few that struck me:

This film is based on several William Faulkner stories that predate Williams’ hit plays by decades, but it also borrows themes and ideas from Cat on a Hot Tin Roof, which was written in 1955 and about to come out as a film as well. Both films starred Paul Newman. The story also resembles Orpheus Descending, which was also about to come out as The Fugitive Kind, starring Marlon Brando. And let us not forget the title, which also seems to reference Summer and Smoke. The director Martin Ritt was an acolyte of Elia Kazan, who had directed Streetcar and Baby Doll, and the similar Pinky, among other things. The screenwriters of The Long Hot Summer, Irving Ravetch and Harriet Frank, Jr. also wrote Hud, Hombre, Norma Rae, Stanley & Iris, and many other well known films. In addition to the Mississippi setting, and the idea of Paul Newman as a rebellious drifter, the film has Orson Welles as a Big Daddy-like patriarch, and Joanne Woodward and Lee Remick as 20th century belles (Newman and Woodward married right after this). Anthony Franciosa is the requisite no-account layabout rich boy. Angela Lansbury is a small-town busybody.

Anthony Mann directed this adaptation of Erskine Caldwell’s banned 1933 novel. It was a notorious property — theoretically no one under 18 was admitted into the cinema. Caldwell’s other famous hit was Tobacco Road, and as with that famous property, God’s Little Acre is part comic, part tragic. Robert Ryan plays a Georgia farmer named Ty Ty who has been neglecting his chores because he is crazy to find the gold that he thinks is buried there. He even kidnaps an albino (Michael Landon) because he thinks it will bring good luck. The most Williams-esque element however is his sexpot daughter-in-law, a Daisy Mae type named Grizelda played by a young newcomer named Tina Louise. This is what put Ginger on the map. VA VA VOOM! Grizelda cheats on her husband Buck (Jack Lord) with his brother Will (Aldo Ray) and all hell breaks loose. Louise is not the only backwoods vixen, though — Ty Ty also has daughters named Rosamund and Darlin’ Jill. In one classic scene, a candidate for sheriff played by none other than Buddy Hackett gets an eyeful of Darlin’ Jill when she asks him to come by and pump her some bath water. In 1958 that sold tickets. 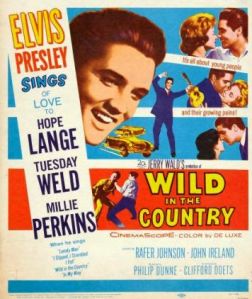 Fascinating to see socialist New York playwright Clifford Odets, who couldn’t be more different from Tennessee Williams, seem to ape his style.  In this film, Elvis Presley plays a young hell-raiser of a country boy who has latent talents as a writer (just go with it). Appropriately,  he has three love interests, the lady psychiatrist (Hope Lange) who tries to draw him out (which is the central element of the plot, as well as its most preposterous one), Millie Perkins (a.k.a Anne Frank) as the nice girl, and Tuesday Weld as his first cousin, and the only one of the females he does indeed shtup, after getting all likkered up on his uncle’s patent medicine hooch.

Odets does a pretty fair job of the scripting, and it’s funny to see him turn his hand to the rural idiom. His knack for metaphor and for folk-speech suits farmer talk surprisingly well. The odd phrase he cooks up is distinctively Odetsian, even though one is more accustomed to hearing snappy city speech come out of his pen: “This routine of yours would stagger a billy goat.” “I’m walking around with a full cup of anger.” More on Wild in the Country here.

Based on Nelson Algren’s 1956 novel, this one stars a young Jane Fonda in the very same year she co-starred in Williams’ Period of Adjustment. The setting is a New Orleans whorehouse run by a highly entertaining, and probably lesbian Barbara Stanwyck. Capucine plays drifter Laurence Harvey’s long lost love, but he also develops a relationship with nice earthy Anne Baxter, who runs a diner. Very racy sex stuff for its time!  I also seem to remember a legless man rolling around the French Quarter on a skateboard, but that just might be my memory playing tricks.

Lillian Hellman already had her own Southern Gothic thing going on, she had no need of Williams. Still I think the enhanced tawdriness of her 1959 play Toys in the Attic, and its screen version might reflect some of his influence. The scene is laid in Hellman’s home town of New Orleans. Two old maid sisters (Geraldine Page and Wendy Hiller) scrimp and save to keep their shiftless, gambling brother (Dean Martin) afloat. One of them has incestuous feelings for her brother. The brother is married to a rich girl (Yvette Mimieux), 15 years his junior. Her mother (Gene Tierney) clearly is having a relationship with her African American servant (Rex Ingram). The brother gets a mysterious windfall and gives everyone the presents they always dreamed of having (notably a trip to Europe for the sisters). No one wants the presents and are just disturbed. In the end, the man whom the brother extorted the money from has thugs beat him up and take the dough back. In addition to the money plot and the questions it asks, and race and incest in the mix, it’s quite a lot for one script to bear, but it’s a popular potboiler.

For a similar post, see my take on numerous Alfred Hitchcock imitations