The Animated Universe of Hanna-Barbera 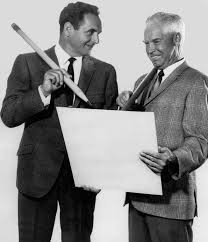 Today we celebrate animation pioneers William Hanna (1910-2001) and Joseph Barbera (1911-2006), immortalized through the name of their joint production company Hanna-Barbera. Like millions of others, I pretty much grew up in the universe they created, and I’v written about many of their shows on Travalanche, so they are long overdue for a tribute.

Hanna and Barbera not only complemented each other, but they covered a lot of ground between them. Hanna was an Irish American from the West, and primarily the story man; Barbera was an Italian American from the East, and in charge of the visual element (to oversimplify their relationship). Hanna grew up in New Mexico, Oregon, Utah, and different places in California before finally settling with his family in Compton in Watts (during a very different era), giving him geographic proximity to the movie industry. In addition to drawing, in his youth he also enjoyed playing saxophone, singing in barber shop quartets, and songwriting — his first writing experience. He had a little college, and worked in construction and at a car wash before he eventually got a job working for Leon Schlesinger at Pacific Title and Art, creating intertitles for silent movies. This led to working on Warner Brothers cartoons (Looney Tunes and Merry Melodies), which led to employment at MGM by the mid ’30s. Which is where he met Barbera, whose desk was right next to his.

Barbera was born on New York’s Lower East Side (10 Delancey Street in fact) and raised in Flatbush. He too was interested in drawing since childhood. In young manhood he boxed competitively for a time and worked as a bank clerk and delivery boy. He also took drawing classes at the Art Students’ League and Pratt, and had single panel cartoons published in magazines like Collier’s, Redbook and the Saturday Evening Post. Then he got a job drawing for Fleischer Studios, followed by Van Beuren Studios, Terrytoons, and finally in 1937, MGM. In 1940 Hanna and Barbera collaborated on the Oscar winning animated short Puss Gets the Boot, which led to the creation of their first blockbuster success, Tom and Jerry.

One of the unique and remarkable touches about Tom and Jerry is that it is not dialogue driven — it’s all rather violent slapstick, making it one of the prime heirs to live action silent slapstick comedy. (I am going to have to go ahead and assume you know Tom and Jerry. Explaining it from scratch would be an entire essay by itself). At any rate, by the mid 1950s, MGM was shutting down its animation production division. And this is when Hanna-Barbera was founded, with the participation of MGM producer/director George Sidney, with whom they had collaborated on Anchors Aweigh (1945 — that scene where Jerry the Mouse danced with Gene Kelly). Hanna-Barbera was the first animation studio expressly set up to create original programming for television. Their first product was the now-forgotten The Ruff and Reddy Show (1957-60). Ironic, eh? Given the huge constellation of famous characters the studio went on to create, certainly rivaling or exceeding those created by Disney, Warner Brothers, et al. So many, in fact, that I can’t do as I did with Filmation, which is include a picture and blurb with every show…or even include every show. I will just mention some of the major ones, and a couple of remarks here and there, and include links to the shows I have already written about.

The winning streak began one year into Hanna-Barbera’s existence with The Huckleberry Hound Show (1958-61), a segment of which Yogi Bear, got spun off into his own show in 1961. Next came Quickdraw McGraw as well as Augie Doggie and Doggie Daddy (1959-1961). In 1960 they launched their first prime time animated series The Flintstones, probably their most successful single franchise. In 1961, the characters of Snagglepuss, Yakky Doodle and Top Cat all debuted. In 1962, Wally Gator, Touche Turtle & Dum Dum, and Lippy the Lion & Hardy Har Har. In 1962 their second prime-time series The Jetsons. In 1964, Magilla Gorilla, Ricochet Rabbit and Jonny Quest. In 1965, Atom Ant, Secret Squirrel and The Hillbilly Bears. They dabbled in classic comedy with animated versions of Laurel and Hardy (1966) and Abbott and Costello (1967). In 1966 Frankenstein Jr. and Space Ghost were introduced. In 1968, their first live action show, The Banana Splits, in collaboration with Sid and Marty Krofft. Now we’re entering MY Saturday morning era!

In the late ’60s Hanna-Barbera did a rash of cartoons clearly modeled on the popularity of Edwardian themed racing movies like The Great Race (1965), Those Magnificent Men in Their Flying Machines (1965), and Those Daring Young Men in Their Jaunty Jalopies (1969). These shows were The Wacky Races (1968), The Perils of Penelope Pitstop (1969) and Dastardly and Muttley and Their Flying Machines (1969).

Then a spate of teen comedies clearly inspired by Filmation’s The Archies (1968), including Scooby Doo (1969, which has to rank with The Flintstones as one of Hanna-Barbera’s most successful shows), Josie and the Pussycats (1970), Speed Buggy (1973), and Wheelie and the Chopper Bunch (1974). They also tapped into popular trends with The Harlem Globetrotters (1970) and Help…It’s the Hair Bear Bunch! (1971). In the early ’70s they tried two new prime time animated sitcoms, Where’s Huddles? (1970) and Wait ’til Your Father Gets Home (1972). Inch High Private Eye arrived in 1973, as did The Superfriends. Hong Kong Phooey (1974) plugged into the vogue for martial arts and the tv show Kung Fu. After Filmation had a hit with an animated version of The Brady Bunch, Hanna-Barbera mined the sitcom universe too and came up with Jeannie (1973, based on I Dream of Jeannie), The Addams Family (1973), and Partridge Family 2200 A.D. (1974). Korg 70,000 B.C. (1974) was an innovative live action show with a prehistoric setting. Then came Grape Ape (1975), Dynomutt (1976), and Jabberjaw (1977), a shark character clearly modeled on Curly Howard of The Three Stooges.

In the ’70s, Hanna-Barbera seems to have gotten the word that kids were tuning into primetime TV on ABC, judging by their programming. The savvy Laff-a-Lympics (1977) seems to have been inspired by Battle of the Network Stars, and brought nearly all of their classic characters out of retirement. Captain Caveman and the Teen Angels (1977) was at least partially inspired by Charlie’s Angels. Then came Fonz and the Happy Days Gang (1980), Laverne and Shirley in the Army (1982). The Gary Coleman Show (1982) was spun off of NBC’s Different Strokes. And CB Bears (1977) also borrowed heavily from a pop culture trend. Getting back to classic comedy, Hanna-Barbera produced an animated version of The Little Rascals (1982).

The ’80s and ’90s were a bit after my time, but there was no missing their most successful shows The Smurfs (1981), The Snorks (1984), and The Powerpuff Girls (1998). And I would like to throw in an honorable mention for Hanna-Barbera’s 1988 cartoon starring Martin Short’s Ed Grimley!

During the later decades of course, there were a zillion crossover series, reboots, live action versions, and a bewildering number of new permutations of the classic Hanna-Barbera characters in team-ups. And there were scores of other shows I didn’t even mention, haven’t seen, never heard of! By the final years of the 20th century the company was merged into others, and Hanna-Barbera’s shows passed into nostalgia.