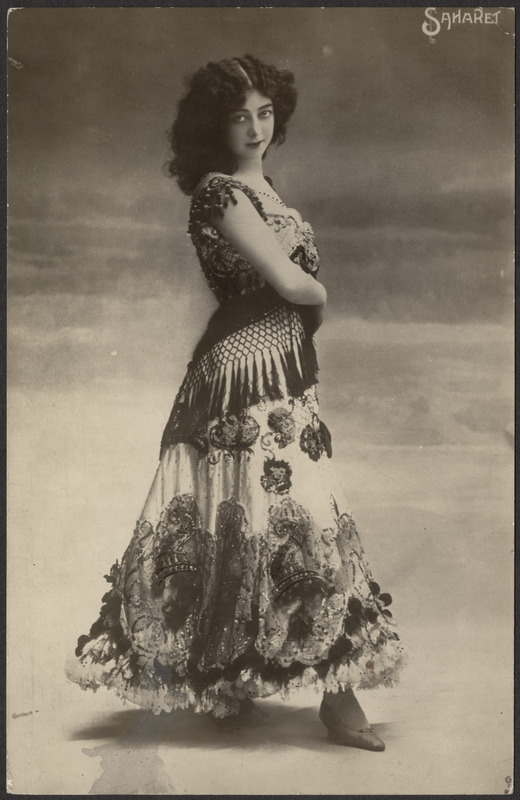 Saharet was born in Australia to a Chinese mother (from Ballarat actually) and an Irish immigrant father. She was already dancing in Australian music halls and vaudeville stages in her youth, using the name Clarice Campbell. By 13 she was performing in Sam Francisco with a group called the Lilliputians, which (contrary to natural assumption) was NOT the same company as Pollard’s Lilliputian Opera Company, which was also from Australia.

She took the stage name “Saharet” prior to 1894, an apparent reference to the Sahara Desert, no doubt a reflection of the Little Egypt and belly dancing trend that gripped the show business world since the 1893 Chicago World’s Fair. Her repertoire ranged from French quadrilles to risque cooch and snake dances. In the mid to late ’90s, she toured with M.B. Leavitt’s companies, and performed at such venues as Koster and Bial’s and the roof garden at Hammerstein’s Olympia. Starting in 1898 she made several tours of the Continent (and even appeared in several German films), and performed on Broadway and on tour with the likes of Anna Held. In 1909 she headlined at the American Music Hall, a vaudeville house run by William Morris that was located across from the present site of New York’s Port Authority bus terminal.

Saharet’s three husbands were all German-born. The first was Isaac Rosenstamm a.k.a Ike Rose, to whom she was married 1896-1913. Rose was also her agent and manager during her peak years, when she earned huge sums of money at the cabarets and music halls of Europe. The second was millionaire industrialist Fritz von Frantzius, whom Saharet married in 1913. Frantzius married her on the condition that she give up dancing. She could only take four days of the oppression, tore up the marriage contract, and ran off with her dance partner Jose Florido. Her third husband was Maxim Phidias Lowe, also her agent, to whom she was married 1917 through 1930. Saharet seems to have retired from dancing around 1920 when she was in her early 40s. She had one daughter, Carrie Rose (b. 1896), who performed on Broadway as Madeline La Varre in The Century Revue (1920-21) and The Midnight Rounders of 1920. Carrie later took vows and spent years of her life in a convent and became an officer in the U.S. Naval Reserve. She committed suicide in 1950 following a massive car accident. Saharet died in 1964, some think also by her own hand.

For lots more on Saharet, I recommend this excellent article.

To learn more about vaudeville, where Saharet was a star. please see No Applause, Just Throw Money: The Book That Made Vaudeville Famous, and for more specifically on Saharet and her husband and agent Ike Rose, please check out my new book Rose’s Royal Midgets and Other Little People in Vaudeville.