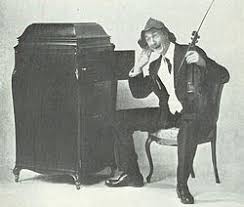 Charles Ross Taggart (1871-1953) was a humorist who made an entire career out of being a rural Vermonter. He was generally billed as either “The Man from Vermont” or “The Old Country Fiddler”. I first learned about him because in 1923 his act was filmed for a DeForest Phonofilm called “The Old Country Fiddler at the Singing School”.

Originally from the Topsham/Newbury area (on the New Hampshire border, less than an hour east of Montpelier), Taggart initially worked as a schoolteacher, music instructor, store clerk and clock repairman before getting the itch to perform. Circa 1895, he developed an act that combined humorous folksy storytelling, fiddle and piano playing, and ventriloquism, and went on the Chautauqua, Redpath, and Lyceum circuits for the next 40 years, In addition to his film, he also made several dozen recordings for the Victor, Edison, Brunswick and Columbia labels, many of which are available to play on Youtube at this writing. 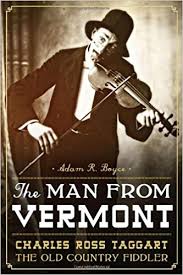 The world repository for all things Charles Ross Taggart is a Vermont gent named Adam Boyce, who wrote The Man from Vermont: Charles Ross Taggart, The Old Country Fiddler (from whence some of the details in this post were drawn), and also gives talks and in-character performances as Taggart! More on Boyce at the Vermont Speaker’s Bureau here.

To learn more about vaudevile and the variety arts, including the Chautauqua circuits, please see No Applause, Just Throw Money: The Book That Made Vaudeville Famous