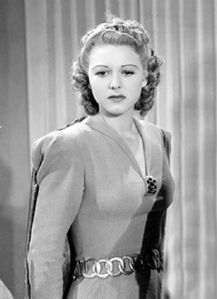 Shirley Deane (Shirley Deane Blattenberger, 1913-1983), sang and danced from her childhood years, and got her first stage experience in her hometown of San Francisco. A good showing in a beauty and talent contest landed her a contract at Fox.  Deane started out in bit and chorus parts in films like Stand Up and Cheer (1934) and Redheads on Parade (1935). 1936 was her big year, first graduating to speaking parts in King of Burlesque and Charlie Chan at the Circus, then landing the female lead in the comedy The First Baby opposite Johnny Downs, and then getting a cast as a regular in Jones Family comedy series with Jed Prouty and Spring Byington. Deane played Bonnie Jones, the family’s oldest daughter, through 10 of the 17 films in the series, through 1939. Early on, she occasionally still played bit parts in other movies such as One in a Million (1936) and On the Avenue (1937). In 1939 she left Fox, and briefly starred in B pictures, appearing in Undercover Agent (1939) for Monogram, and then taking over for Priscilla Lawson as Princess Aura in Flash Gordon Conquers the Universe (1940) at Universal.

Through the ’40s Deane mostly performed on radio shows like Kraft Music Hall and Lux Radio Theatre, and sang with big bands in night clubs and USO canteens. She returned to the screen for two British thrillers in 1957, You Pay Your Money and Kill Me Tomorrow, but by that time she was mostly retired.

for more on classic film please read Chain of Fools: Silent Comedy and Its Legacies from Nickelodeons to Youtube.