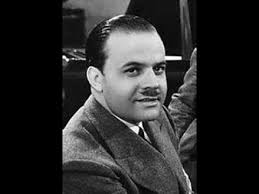 Despite the fact the he wrote one of my favorite songs, I haven’t yet written about songwriter Nacio Herb Brown (1896-1964, sometimes billed as Herb Nacio Brown) chiefly because, unusual for a Tin Pan Alley songwriter, Brown did not originate in vaudeville or musical theatre but went straight into the movie industry with the coming of sound. Brown was a creature of the southwest, born in Deming, New Mexico. His father was a Wells Fargo stagecoach driver. It is interesting that the surnames of both of his parents (Brown and Hopkins) are Anglo, yet his first name is a Latinized nickname for Ignatius. Whether he was of Mexican lineage himself I don’t know, but his name reflects a cultural connection.

When Brown was five, his family moved to Los Angeles. He learned the rudiments of music from his mother, but pursued it only as a hobby and a sideline in his early adulthood, working first as a tailor and then a real estate dealer. By 1927 he’s had a few hit songs and joined ASCAP. At the dawn of sound, Irving Thalberg hired him to be a staff songwriter for MGM, where he usually cowrote with Arthur Freed. Early in this period, he actually appeared on camera in two of the films containing his tunes, The Broadway Melody (1929) and The Hollywood Revue of 1929. That song I mentioned in the first sentence “The Wedding of the Painted Doll”, was featured in the latter picture (for more on the role that tune has played in my life go here and here). Most of Brown’s best known early tunes gained their greatest fame because they became the basis of the 1952 Gene Kelly musical Singin’ in the Rain, including the title song, “Good Morning” and “Make ‘Em Laugh”. It was only after achieving Hollywood fame that Brown wrote for Broadway, the 1932 show Take a Chance, which starred Jack Haley, Ethel Merman, June Knight, Sid Silvers, et al. In 1934 he married the most famous of his five wives, the actress Anita Page. The union lasted only a year. In addition to writing dozens of songs for as many movies he also wrote the theme song to the TV show Hopalong Cassidy, in collaboration with L. Wolfe Gilbert.

To learn more about the variety arts please see No Applause, Just Throw Money: The Book That Made Vaudeville Famous,