Bob Carney: From Bedini to Burlesque 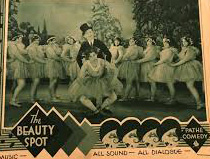 Carney was comedy partner to his wife Jean Carroll (this is apparently a different Jean Carroll from the one in Carroll and Howe. The latter later became known as a stand-up comedian; Carney’s wife was a burlesque dancer who sometimes also participated in comedy sketches. She’ll be getting her own post here in a couple of months)  A 1927 item in Vaudeville News tell us that “Bob Carney and Jean” were appearing in Jean Bedini’s Hello Goodbye revue and also were presenting a new vaudeville act penned for them by Benny Ryan of Ryan & Lee. If this is the same Jean he later married and performed with in burlesque, she was only about 12 years old here, making it doubtful.

In 1930, Carney (sans “Jean”) made several comedy shorts for Pathé: The Beauty Spot with Doris Dawson, Ride ‘Em Cowboy and Sixteen Sweeties, both directed by Harry Delmar, co-starring Thelma White; and then several which Carney both starred in and co-wrote: Some Babies with Little Billy Rhodes, Richard Carle, Ruth Hiatt and John Hyams; All for Mabel with Sally Starr, One Nutty Night, and Under the Cock-Eyed Moon. He also co-wrote a 1931 short called Sea Going Sheiks, but did not appear in it.

In the late ’30s, I see references in Variety and Billboard to Carney appearing in burlesque with the likes of Rags Ragland. In the late ’40s and ’50s, Carney and Jean Carroll, Billie Bird and others were in residence at the Colony Club in Los Angeles. The ’50s also saw a return to film. Carney appears with Carroll in French Follies (1951) in which he performs the famous “Crazy House” sketch (also associated with Abbott and Costello), A Night in Hollywood (1953), Dream Follies (1954), and Naughty New Orleans (1954) all filmed records of burlesque shows. (The latter one features Carney performing comedy bits with Harry Rose) .

Carney also took bit parts in narrative films, such as Kentucky Jubilee (1951) with Jerry Colonna, It Grows on Trees (1952) with Irene Dunne, Somebody Loves Me (1952) with Betty Hutton, A Perilous Journey (1953) with Vera Ralston and David Brian, Champ for a Day (1953) with Alex Nicol, Make Haste to Live (1954) with Dorothy Maguire, Headline Hunters (1955) with Rod Cameron, and Accused of Murder (1956) with Ralston and Brian. His last screen credit was an episode of the tv show Frontier Doctor in 1958. I surmise that this is also the year of Carney’s passing, as that year Carroll married a second husband and burlesque comedy partner, Billy “Zoot” Reed.  But I could be wrong. It’s been known to happen!

To learn more about vaudeville and burlesque, please see No Applause, Just Throw Money: The Book That Made Vaudeville Famous, and for more on classic comedy please read Chain of Fools: Silent Comedy and Its Legacies from Nickelodeons to Youtube.