On the Many Screen Versions of “Little Women”

Here’s a true fact that tells you everything you need to know about gender relations in America. I don’t believe I’ve ever met an American woman for whom Little Women is not a sacred text. This includes feminists, traditionalists, bibliophiles, and women who’ve scarcely read a book in their lives. If they read ten books total, Little Women is one of those ten, and probably their favorite. And, at the same time (this is the revealing part), I’d be shocked to encounter any (straight) American man who’ll cop to having read it, let alone liking it. I had a rough familiarity with the book in my youth but didn’t give it a really serious look until I was solidly middle-aged. To be gender-essentialist (and I’m not saying I approve of the attitude, quite the contrary), it’s simply going to be hard to convince a boy to put down his toy guns and voluntarily read a book called Little Women. It’s like asking him to play with dolls. Yet the world would be so much better off it were required reading for boys if for no other reason than it might put a chink in the wall between these overly defined artificial genders. Apart from its charms and strengths as a story, Little Women is a window into the tension between domesticity and aspiration that women were experiencing in this country as long ago as the 1860s. Put yourself in their shoes, dudes! It’s not irrelevant to your own life in any way, unless you’re so blind you can’t see it. And even if you thought it relevant, a little empathy with someone outside yourself is frankly a prerequisite for membership in the tragically small pocket of the human race that aspires to be civilized.

I’ve learned to love the book and its screen adaptations on their own merits, but also because it represents me in ways supplementary to the gender question. I’m from rural New England, the setting of the book, and I’m distantly related to Louisa May Alcott. I was just in Concord a few months ago, speaking at a theatre that was co-founded by Alcott, so the setting is extremely meaningful to me just now. So it was with perverse glee that we we chose to observe Superbowl Sunday by finally going to check out Greta Gerwig’s new screen version of Little Women. Forthwith, our long-planned post on the book’s history of screen adaptation over the last century. 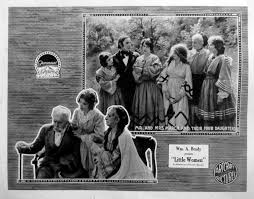 While an earlier version had been produced in the UK the previous year starring Minna Grey, this is the first American version, independently produced by Broadway impresario William A. Brady, and released through Paramount. Brady had earlier produced a Broadway stage version in 1912 starring his daughter Alice Brady as Meg. Alice was otherwise occupied in 1918; in the film the March sisters were played by Isabel Lamon, Dorothy Bernard, Lillian Hall, and Florence Flynn, and Kate Lester as Marmee. If this cast has largely been forgotten at least posterity remembers Henry Hull, who played the tutor John Brooke, and Conrad Nagel, who played Laurie. The film was shot on location at Ralph Waldo Emerson’s house in Concord! Sadly this movie, like the British film that preceded it, is now lost

This may be the version best known and loved by masses of movie buffs up ’til now, for it is imbued with Hollywood magic — a classic version of a classic. Husband-wife screenwriters Victor Heerman and Sarah Y. Mason got an Oscar for the script, which was directed by George Cukor for RKO, with the exceptionally well cast Katharine Hepburn as Jo, Joan Bennett as Amy, Frances Dee as Meg, Jean Parker as Beth, Spring Byington as Marmee, and — gloriously — Edna May Oliver as Aunt March. It was Hepburn’s fourth film, and having so much in common with the heroine (a free-spirited tom-boy New Englander), she dove into the role headfirst, going so far as to have the costumier re-create a dress worn by her grandmother. Everyone loves to imitate Hepburn’s exclamation of Jo’s mild oath “Christophuh Co-LUM-bus!” 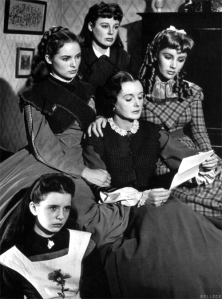 One might wonder why a new version was thought necessary so hard on the heels of the RKO adaptation, but it all comes clear when you learn that David O. Selznick had acquired the Heerman-Mason script. He clearly intended to give it his patented Selznick soup-to-nuts treatment, but in the mid ’40s, up this neck in Duel in the Sun (1946), he sold the property to MGM, which put it into production with Mervyn LeRoy as director/producer. This, too, is a fine version, with, if anything, many more stars than any existing adaptation. If June Allyson is not as memorable as Hepburn in the role of Jo, we do recall that this is the one with young Elizabeth Taylor as Amy and Peter Lawford as Laurie. Janet Leigh, then in the third year of her film career was Meg, with Margaret O’Brien as Beth. Leon Ames, also the dad in Meet Me in St. Louis, is Mr. March, while Mary Astor played Marmee, in one of her last roles prior to a sanitarium stay for alcoholism and a sleeping pill O.D. seriously slowed dow her career. This was also the last film for C. Aubrey Smith, who played Mr. Laurence. And Harry Davenport (Dr. Meade from Gone with the Wind) plays the town doctor, who sees to the dying Beth. While the film was in the can by 1948, it was not released until the following year, with a major Easter-time launch at Radio City Music Hall. Like a lot of films of the post-war “boring” years, this Little Women tends to file off rough edges, and to privilege domestic happiness over strivings, dissatisfaction, and existential angst, which one might say is contrary to the book’s chief significance (which is probably why the 1933 version is better loved and remembered).

While there had been several BBC tv versions from 1950 through 1970, the next noteworthy adaptation was a 1978 two-part tv miniseries which ran on NBC. Its all-star cast included Susan Dey of The Partridge Family as Jo, Meredith Baxter (Family Ties) as Meg, Eve Plumb (The Brady Bunch) as Beth, with Ann Dusenberry (Jaws 2) as Amy, with Hollywood veterans Dorothy Maguire as Marmee, Greer Garson as Aunt March, and Robert Young as Mr. Laurence, and William Schallert and Joyce Bulifant also in the cast. At this writing, it is available to watch on Youtube. It can best be described as “workmanlike, but uneven”, with supporting cast outshining the leads as well you may expect, which is far from an ideal situation.

This was Australian director Gillian Armstrong’s film just prior to Oscar and Lucinda (1997), and its strong cast make it the best known modern version prior to the current one, with Wynona Rider (Jo), Kirsten Dunst (Amy), Claire Danes (Beth), Christian Bale (Laurie), Susan Sarandon (Marmee), Mary Wickes (Aunt March), Eric Stoltz (John Brooks), and John Neville (Mr. Laurence). The film is not memorable precisely other than the charm of the individual actors. 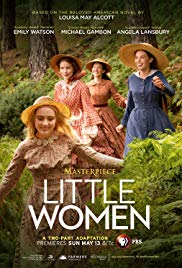 Lea Thompson (Marmee) is the best known cast member in this independent production, which has the dubious distinction of being the first production to re-set the story in the present day. I’ve not yet seen it, but I am skeptical, given how rooted the source material is in the times which produced it. I can’t imagine how you would transplant it to the present day, but I’ll keep an open mind if I get the opportunity to see it.

I’m afraid I’ll have to bore you by concurring with the prevailing raptures over this movie. It’s hard to imagine it ever being surpassed, for a thousand reasons. It’s clearly a labor of love on the part of writer/director Greta Gerwig, and, knowing how important the book is to American women, she appears to have taken her mission beyond seriously. Every element is rendered with immense care, from the script, which draws from both volumes of the book as well as Alcott’s life, to the gorgeous, accurate art direction and location shooting in Concord, to the savvy casting and heartfelt performances. Saoirse Ronan, who’d starred in Gerwig’s Lady Bug (2017) is the sensitive, passionate Jo (here infused with real-life elements from Alcott’s life and career). Florence Pugh (The Little Drummer Girl, Midsommar) is her sisterly rival Amy. Emma Watson (Hermione!) is the serious oldest sister Meg, and Eliza Scanlen (Sharp Objects) is Beth, with Laura Dern as Marmee, Meryl Streep as Aunt March, and Chris Cooper as Mr. Laurence. The most jarring member of the cast is Bob Odenkirk, whose face and manner is perfect for a 19th century American male (he actually looks like Ralph Waldo Emerson), but his comic associations are so extreme, it took me quite a while to mentally integrate him into the world of the film, if I ever did, however much I love him.

That the girls are all either Irish, English, or Australian I take it may be laid at the feet of the fact, and I say this only half facetiously, that Americans don’t know how to talk anymore. That is to say, to talk with anything like the diction or reserve of a 19th century character. As it was, I noted a few anachronisms in speech and body language, concessions to modernity that, if anything, help us to connect (as we connected to Sophia Coppola’s Marie Antoinette). I’d be willing to listen to your nominations for young American actors who can speak, and be proved wrong. I can’t think of any at the moment. My bete noir will always be James Franco as The Wizard of Oz.

Beyond all the moving performances, Gerwig’s main triumph in the film is solving aspects of the novel by folding in Jo’s tussles with an editor (Tracy Letts), thus shedding light on the compromises Alcott was forced to make in getting her magnum opus published, and relieving us all of the traditional agony of the thwarted ending. A huge part of the pleasure of this film was its sophistication. It really is for fans of the book and the best known film versions, for it is in dialogue with its past incarnations, and also trusts that we know the story so well that it doesn’t have to be overly expository. It sort of plunges right in, taking for granted that we already know these characters. Whether or not it will confuse Little Women virgins I do not know, however I will say there was a man a few seats ahead of us to whom the story seemed new (he wasn’t expecting Beth’s death for example) and he was enjoying himself VOCIFEROUSLY. At any rate, I was distressed to learn that Gerwig was not nominated for a Best Director Oscar, but glad to know that her Little Women is nominated for Best Picture. It deserves to win.