Randolph Scott is Not a Punch Line 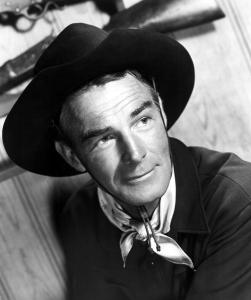 Today a long overdue post on the terrific Hollywood star Randolph Scott (1898-1987). Scott is someone you can use as a sort of litmus test: if you meet someone who is familiar with his work you’ll know right away that they are either a hardcore classic movie buff or a fan of westerns. This is because the latter genre dominated his career after the mid ’40s, and his non-western films are all prior to that, with none quite at the level of recognition as certain perennial classics starring contemporaries like Bogart, Cagney, or his good chum Cary Grant (whom we’ll return to). Most ordinary people know him exclusively from a single reference to him in Mel Brooks Blazing Saddles. Please don’t ever embarrass us both by trying to seem smart by bringing up the ONE thing you know about somebody, which isn’t even a thing, as people so often do. If someone did the “Randolph Scott!” thing in my presence, I’d be sorely tempted to dispatch them with a Colt .45 and bury them up at Boot Hill.

At any rate, I call this post overdue because I’ve been planning it for years, and have only kept postponing it for the most preposterous of reasons. Completion mania. I have seen almost four dozen of Scott’s westerns, but there are still another dozen or two I still haven’t seen, and most of them are reasonably available. So I wanted to wait until I seen them all. But it’s madness, you realize. While I have done posts on all the westerns of John Ford, John Wayne, Joel McCrea, and others, unless it is your main mission in life doing ALL the westerns of Randolph Scott would be pretty insane, for reasons we’ll get to. (It’s a worthy mission, it’s just not mine).

Like most people, I was ignorant of Scott’s work for a long time, but over the last couple of decades I’ve grown to know it very well. He is a  fascinating, fairly unique movie star. Not just because of his striking appearance, but because of his demeanor. Culturally, he is kind of a dodo bird. His is one of the few true prominent cinematic examples you’ll find of the old world, aristocratic, coastal Southern accent. Raised in Virginia and North Carolina Scott speaks a dialect whose English origins you can hear. It’s been largely displaced by the Scots-irish influenced Hill People accent most people associate with the modern South, which you might call the “NASCAR” accent. So I love to listen to him talk. It’s like listening to history. I’ve always considered it crazy he never played Owen Wister’s Virginian in any movie (although he did have a bit part in one version). Scott practically WAS the Virginian. But as I say, it’s more than his manner of speech, it’s his whole cultural demeanor. He was fine and graceful, dignified, gentlemanly. Needless to say, it set him apart from the rodeo riders and stunt men and country western singers who often went into the genre.

At all events, Scott’s father was a textile manufacturer; his mother a Southern belle. Initially, he was groomed for a conventional life in his social milieu. He spent some time in the army, and some time at college, and some time working for his father, but ultimately he took it into his head to become an actor. In his case, it was easy to begin a career. His rich family connections got him a letter of introduction to Howard Hughes, and he was launched. Normally, I hate such examples of nepotism, but in this case there are no regrets. I would not prefer a world in which Randolph Scott was not a screen star.

On the set of the racy pre-code film Hot Saturday (1932) Scott met Cary Grant, and the two became housemates for the next dozen years. If you have some time, I heartily recommend googling the pair of them. There are many claims, rumors, and innuendoes abroad in the land, fueled by many hilarious photographs (many of which I suspect are photoshopped), to the effect that the pair were gay lovers. Maybe, maybe not. A large part of me suspects that they were just having fun egging on the suggestions when photographers were in the room. But this I know: Scott was married to heiress Marion DuPont from 1933 through 1936, but he kept the house with Grant. He didn’t relinquish it until 1944, when he married actress Patricia Stillman, with whom he adopted two children.

As we say, in the early years, Scott starred or co-starred in many non-western films, including Murders in the Zoo (1933) with Charles Ruggles and Lionel Atwill; Roberta (1935) with Fred and Ginger and Irene Dunne; She (1935) with Helen Gahagan Douglas; The Last of the Mohicans (1936), Go West Young Man (1936) with Mae West; Rebecca of Sunnybrook Farm (1938) with Shirley Temple; and My Favorite Wife (1940) with Grant and Dunne.

Scott had been in westerns since the early ’30s as well; it wasn’t until after World War Two that he began to focus exclusively on them. Consequently, there are many phases and types to his work in the genre. When one speaks of a “Randolph Scott western” one is generally talking about the ones of the later period, and not the more conventional oaters of the earlier years, though many of them be classics: Jesse James (1939), Frontier Marshall (1939), When the Daltons Rode (1940), Western Union (1941), The Spoilers (1942 with Wayne and Marlene Dietrich!), and the very interesting Belle of the Yukon (1944), which paired him with Gypsy Rose Lee!

The post-war pictures are like machine-made products, designed purely to turn a profit. They tend to be formulaic, relatively dull, and feature Scott as the only marquee name. He generally played a loner with a code, who wound up in some situation where his principled strength and courage were needed to vanquish some crook who was despoiling a town or a settlement or whatever. They’re often quite nice to look at, especially the Technicolor ones or Cinecolor, or whatever the process happened to be, depending on the studio, but a bit deadly to watch, especially when you binge watch several at a gulp, as I have been known to do. But there are wheels within wheels. Several of his movies from this period, including the ones he made with director Budd Boetticher and screenwriter Burt Kennedy. I am sorely tempted to list Scott’s western classics of the ’40s and ’50s, but it’s silly. Just go to IMDB and look.

Sam Peckinpaw’s Ride the High Country (1962) was the last starring film for both Scott and Joel McCrea, and the early retirement is frustrating but understandable. Frustrating because Scott was one of those ones who just got better and better the older he got. Understandable, because he was 64, and he’d starred in over 100 films by that point, and he was really cranking them out in the ’40s and ’50s, which must have been exhausting. (His buddy Cary Grant retired also just 4 years later, though in his case mostly for reasons of vanity.) Unlike most Hollywood actors, who essentially keep working until they die because they are addicted to the glamor and their expensive lifestyles, Scott was independently wealthy, so he didn’t need the money. Not only did he have his family fortune, but he’d invested it as well as his Hollywood earnings wisely. He was a millionaire many hundreds of times over. Still — one cameo on The Love Boat would have been nice. Him sharing a stateroom with Cary Grant on The Love Boat would have been the best must-see TV ever.