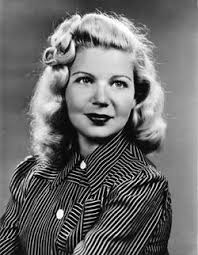 Three Cheers for Florence Halop (1923-86) whose career in radio and television spanned five and a half decades.

A native of Queens, Florence was the younger sister of Billy Halop, one of the original Dead End Kids, who later went on to play Bert Munson on All in the Family. Possessing a husky voice not unlike Rose Marie’s, she was already acting on radio by age 4, where NBC publicized her as their youngest star. Among her national radio credits were appearances on Coast to Coast on a Bus, Wheatenaville (sponsored by the cereal Wheatena), Duffy’s Tavern, and The Jimmy Durante Show. She also got a little film work, appearing in Nancy Drew…Reporter (1939), and the 1940 serial Junior G Men.

On television she had a regular role on Meet Millie (1952-56), replacing Bea Benaderet, who had played her role on radio. For years she guested on programs like The Danny Thomas Show, The Dick Van Dyke Show, That Girl, Love American Style, The Mod Squad, Chicago Teddy Bears, Wait til Your Father Gets Home, Police Woman, Angie, Alice, and Barney Miller (6 episodes). She had bit parts in the movies The Glass Bottom Boat (1966) and The Boatniks (1970. Her scratchy voice was useful as a voice-over regular on Captain Caveman and the Teen Angels (1977-80). 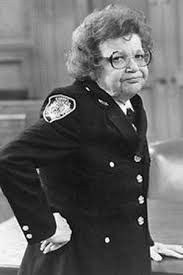 In the mid ’80s her career got new momentum as she capitalized on “crazy old lady” work. She had a recurring character Mrs. Hufnagel on St. Elsewhere (1984-85). And then she replaced Selma Diamond as a comical old lady bailiff on Night Court (1985-86). Sadly, after 22 episodes, Halop died of lung cancer, just as Diamond had. She was replaced in the slot by Marsha Warfield, who played a very different sort of character.