Steve Brodie: Of the Bowery and the Brooklyn Bridge 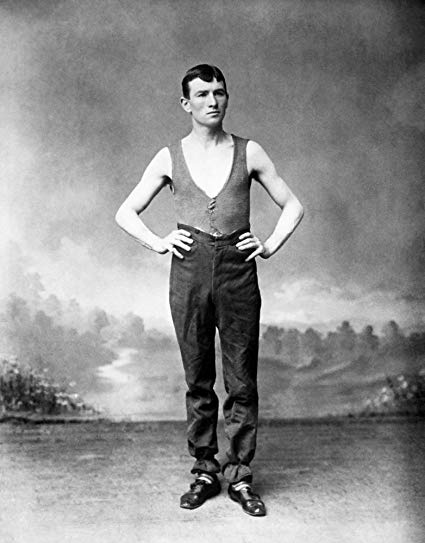 The name Steve Brodie (1861-1901) is holy to New York history lovers, even if his most famous feat stirred up a lot of muddy water. Brodie dined out for years on having jumped off the Brooklyn Bridge — or possibly not having done so. But the resulting fame also propelled him into show business, which attracts us especially to his story.

Brodie was a Bowery newsboy who longed to make it into the news himself. Following Robert Emmet Oldum’s fatal dive off the then-new Brooklyn Bridge in 1885, Brodie declared to his bar buddies that he would attempt the same feat — and proceeded to take bets on it. Two New York Times reporters claimed to have witnessed him taking the historic leap on the night of July 23, 1886. A barge captain who picked him up in the water signed an affidavit attesting to the fact. There was no crowd; this was done without an announcement, from a section of the bridge that was 135 feet over the East River. The resulting notoriety got Brodie sufficient capital to open his own saloon on the Bowery, with its own back-room museum devoted to the historic jump. He toured vaudeville recounting his daredevil feat, and later appeared as himself in the 1894 musical On The Bowery, which also featured Valerie Bergere. His name became idiomatic in popular slang: to “take a Brodie” is to take a potentially fatal risk. 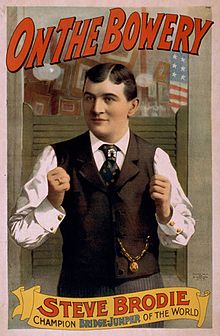 Brodie clearly had a substantial gift for publicity. The fact is, many people have jumped off the Brooklyn Bridge, and some of them have survived. The funny thing is, Brodie may not have (jumped, that is). Then and now, many believed that Brody simply threw a dummy off the bridge and then swam out into the river to get picked up. One of his old Bowery pals was quoted in the Brooklyn Eagle saying that Brodie had confessed to him that he had never taken the leap. So the whole thing may have been a lucrative con. Unfortunately, there wasn’t much time for posterity to get to the truth of the matter. By 1901, Brodie was dead, at the young age of 39.

Brodie’s legend only grew. In 1933 he was played by George Raft in the movie The Bowery. Starting in 1944, Hollywood actor John Stephens (1919-1992) used the familiar moniker as his screen name in honor of the bridge jumper. No book about the Bowery in its heyday would be complete without a reference to him, even if he never flung himself off the bridge. Brodie’s fame came to be more significant than what he was supposed to be famous for. A portent of things to come.

To learn more about vaudeville, please see No Applause, Just Throw Money: The Book That Made Vaudeville Famous