Some Tidbits on Hamilton and Barnes 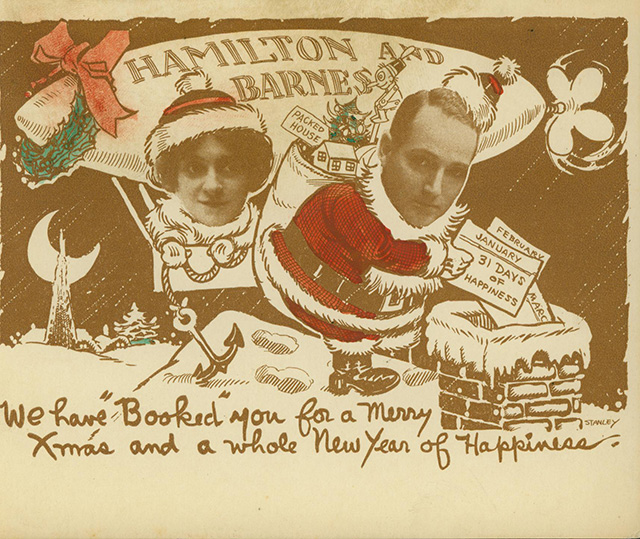 We learned about the team of Hamilton and Barnes from this promotion Christmas card of theirs, which was shared on LongIsland.com. Helene Hamilton and Jack Barnes were a husband-wife vaudeville team who played the US circuits and as far away as Hawaii, Australia, and New Zealand.

They were paired at least as early as 1914, when the Altoona Times wrote of their local Orpheum turn, that it constituted  “one of the season’s keenest conversational and song stunts”. One finds references to them playing Buffalo, Minneapolis, Ottawa, Boston, New York, Wichita, Indianapolis, Wilmington, Washington DC, Atlantica, Cincinnati, Wilkes-Barre, and New York between the mid teens and mid ’20s.

Here’s an ad for a 1922 engagement at the Strand Theatre in Norwich, CT where they are to perform something called “Just Fun”. This one especially excites me, as it’s something my 17 year old grandmother, who lived in a nearby town, might well have gone to see:

To learn more about vaudeville, please see No Applause, Just Throw Money: The Book That Made Vaudeville Famous.