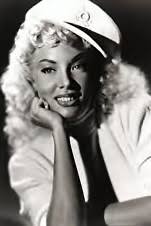 Originally from Dunkirk, New York (right next door to Fredonia), Pompender may have taken her professional name from a 1932 movie starring Corinne Griffith and Colin Clive. The “Cat Girl” embellishment was because of her lithe, sinewy moves. Her father was a phys ed teacher. Throughout her life she maintained a healthy, physically active lifestyle. She practiced yoga and was a vegetarian, back when both of those choices were rare. By contrast, her bright blonde hair was anything but natural.

As a young person, she had small walk-on roles in four Hollywood musical comedies with show biz themes: Irish Eyes Are Smiling (1944) with Monty Woolley and June Haver;  My Wild Irish Rose (1947, the Chauncey Olcott bio-pic starring Dennis Morgan); and two pictures with Morgan and Jack Carson: Two Guys from Milwaukee (1946) and Two Guys from Texas (1948). 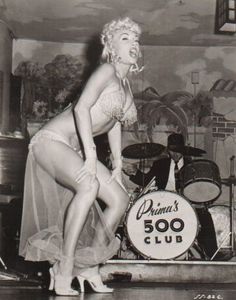 Lilly Christine became a professional burlesque dancer in 1948, performing a “voodoo love potion dance” at Prima’s 500 Club in the French Quarter in New Orleans. She also did numbers with French, Native American, and African themes. 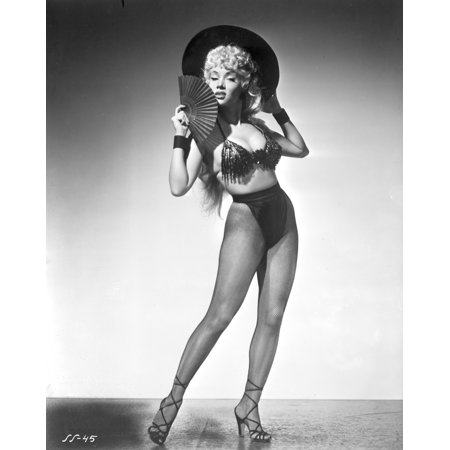 From 1950 through 1951 she performed her trademark cat girl dance in Mike Todd’s Peep Show on Broadway. She is also rumoured to have gone on in Burlesque (1946-48) with Bert Lahr, although that awaits confirmation. (She’s not in the IBDB credits for that show; she may gone on as a substitute). It was during this period that columnist and radio personality Walter Winchell called her “genuine Gee-whiz boy-bait”.

No doubt on account of her cat-like moves Lilly Christine was one of several performers considered for the lead role in a series of Sheena, Queen of the Jungle movies produced by Sol Lesser. The films weren’t produced, but Irish McCalla eventually played the role in a 1955 TV series.  Lilly Christine did appear in a West German TV movie called Achtung! Hochspannung! (1955). 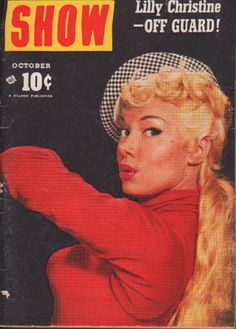 Apart from her burlesque work, LiIly Christine earned her greatest fame as a model. She never posed nude, but her spreads were plenty naughty. Throughout the ’50s she posed for the magazines He (1953 and 1954), Gala (1953), Cover Girls (1954), Vue (1955), Tempo (1955), Adam (1956), Modern Man (1956), and Rogue (1958). She also is known to have posed for Dare, Peep Show, Desire, and Esquire. Once she aged out of modelling, Lilly Chrstine continued to dance in burlesque clubs, mostly in southern cities, until the end of her life. She was only 41 when peritonitis took her on an operating table in Broward County, Florida.

To learn more about show biz history, please see No Applause, Just Throw Money: The Book That Made Vaudeville Famous