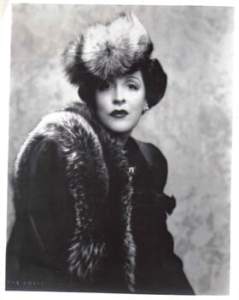 A 1941 Life magazine article says that one Ernestine Russell took the first name Jane, i.e. Jane Russell in honor of Jane Cowl (1883-1950). Boston-born Cowl was a Broadway star and playwright nicknamed “Cryin’ Jane” for all the weepy parts she created. Despite that, her best known work, which she wrote (under a pseudonym), directed and starred in on Broadway in 1919 was called Shining Through. She made her debut in Dorothy Vernon of Haddon Hall (1903-04), then went on to nearly three dozen subsequent Broadway productions. Her Shakespearean parts included Juliet (over 1000 performances in 1923 — at age 40!), Cleopatra (1924), and Viola (1930). She also played Dolly Levi in the original production of Thornton Wilder’s The Merchant of Yonkers, which later became the basis for the musical Hello, Dolly!  Her husband was Broadway producer Adolph Klauber, who was also the former critic for the NY Times. He collaborated with Cowl on some of her shows, and also co-produced some of her shows with the Selwyns. Cowl’s last Broadway turn was in the title role in The First Mrs. Fraser (1947).

Though primarily a creature of the theatre, Cowl also dabbled in films. She starred in the silent features Garden of Lies (1915), and The Spreading Dawn (1917), and later took supporting roles (though with pretty good billing) in Once More My Darling (1949) with Robert Montgomery and Ann Blyth; The Secret Fury (1950) with Claudette Colbert and Robert Ryan; No Man of Her Own (1950) with Barbara Stanwyck; and the posthumously released Payment on Demand (1951) with Bette Davis and Barry Sullivan. Several of her plays were also adapted into films: Daybreak, Information Please, Smiling Through, The Flaming Sign, and Lilac Time.

To learn more about vaudeville, please see No Applause, Just Throw Money: The Book That Made Vaudeville Famous, and for more on silent film please read Chain of Fools: Silent Comedy and Its Legacies from Nickelodeons to Youtube.