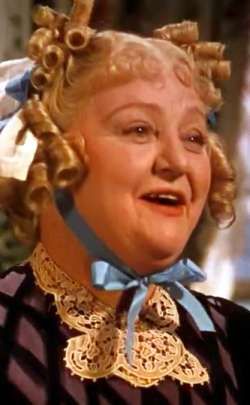 Well, if we weren’t mere hours away from the 80th anniversary of Gone With the Wind, I might not have felt the same urgency toward doing a post today on Laura Hope Crews (1879-1942) the lady who played Aunt Pittypat (December 12 is her birthday). Rest assured a post on the film itself is in the queue — look for it tomorrow if the creek don’t rise.

Crews was second generation theatrefolk, hailing from San Francisco, a major theatre town almost from the earliest years of its existence. Laura began acting onstage at age four. Unfortunately much documentary record of ealy life was destroyed in the Earthquake and Fire of 1906.

By 1903 Crews was on Broadway in Merely Mary Ann. Over the next four decades she would appear in 40 more Broadway productions. By the 1920s she was a major star of the Great White Way. Notable successes included Much Ado About Nothing (1913), in which she was Beatrice to John Drew Jr’s Benedick); A.A. Milne’s Mr. Pim Passes By (1921, with Erskine Sanford); the U.S. premiere of Noel Coward’s Hay Fever (1925) which she co-directed with the playwright; and the premiere of Sidney Howard’s The Silver Cord (1926-27). She also appeared in the 1933 screen version of the latter. Howard would of course win a posthumous Oscar for the screenplay for Gone with the Wind.

Crews had also appeared in over dozen films prior to GWTW, including Camille (1936) and Idiot’s Delight (1939). Billie Burke was originally sought for Aunt Pittypat, but she was perhaps too busy with a certain other major MGM role that year — one that was distinctly more to her mature age. George Cukor suggested Crews for the role based on her work in Camille. After GWTW, Crews appeared in another half dozen films, including The Blue Bird (1940) with Shirley Temple and Rene Clair’s The Flame of New Orleans (1941) with Marlene Dietrich. Her last screen role was in the comedy New York Town (1941). In 1942, she had her last Broadway part, subbing in the role of Abby Brewster for a time in the original production of Arsenic and Old Lace (1942).