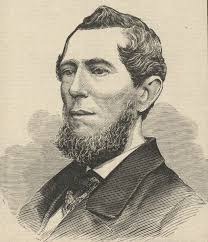 Billy Whitlock (1813-1878) was a influential blackface minstrel** performer of the 19th century. Whereas many of the seminal entertainers in that genre were from places like Ohio and Kentucky, Whitlock was from New York City, which was the epicenter of the national mania for the form. Initially he worked as a typesetter, but when Joel Sweeney came to town in 1838, Whitlock took banjo lessons from him and became a performer himself, starting out at P.T. Barnum’s American Museum in 1839. Billed as “King of Banjo Players and Emperor of Extravaganza Singers” Whitlock plied his trade in circuses, dime museums, and minstrel shows. For a time he was in a double act with John Diamond. Later he replaced him with Frank Lynch, who took the name Frank Diamond. At moments in the act, Whitlock would play a wench (drag character) named “Sambo Squash”. Descriptions of it sound like foreshadowing of acts from several decades later such as Harrigan and Hart.

In 1843, Whitlock became one of the founding members of the Virginia Minstrels, along with Dan Emmett, Dick Pelham, and Frank Bower (later Joel Sweeney would perform with them as well). When they opened at the Bowery Ampitheatre, Whitlock was the most famous one of the quartet. Along with his singing, banjo playing, and joking, Whitlock did a prototypical version of a stump speech on the topic of locomotives (then quite a new invention, making it topical). Later he would perform in the Kentucky Minstrels with Barney Williams, and with a group called the Operatic Brothers and Sisters, with members of Jerry Bryant’s Minstrels. His last performance was in 1855.