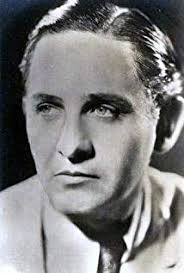 Actor Robert Williams (1894-1931) was on the fast track to stardom when death snatched him the moment he arrived.

The North Carolina native ran away as a teenager to perform in tent shows and on riverboats, working his way up to touring stock companies. He had a supporting role as a Native American in a 1914 silent western called The Vengeance of Winona, produced by the Kalem Company, and supported Marjorie Rambeau in the 1917 play Eyes of Youth before serving in World War One. In 1920 he appeared in another silent film Thoughtless Women, with Alma Rubens and Eddie Boland. The following year, he married popular jazz singer Marion Harris, but the liaison only lasted a few months. In 1922 he became a Broadway star, playing the title character in the smash hit Abie’s Irish Rose. Eight more Broadway shows would follow through 1930, the most notable of which was The Trial of Mary Dugan (1927). In 1924 he married silent comedy star Alice Lake; this marriage too lasted only a year.

Williams’ first talkie was the 1928 Paramount short Two Masters with Mary Eaton. In 1931, he acted in the screen adaptation of Rebound, a play in which he’d also appeared on Broadway. That same year he also appeared in The Common Law with Constance Bennett, Joel McCrea, and Lew Cody; Devotion with Ann Harding and Leslie Howard; and Platinum Blonde, with Jean Harlow and Loretta Young. This last was his biggest role to date and seemed to indicate that he was on the way to leading man status in Hollywood. Unfortunately he came down with an acute appendicitis and contracted peritonitis from the ensuing operation. He was 37 years old when the infection took him.

To learn more about vaudeville, please see my book No Applause, Just Throw Money: The Book That Made Vaudeville Famous, and for more on early film, please read Chain of Fools: Silent Comedy and Its Legacies from Nickelodeons to Youtube.