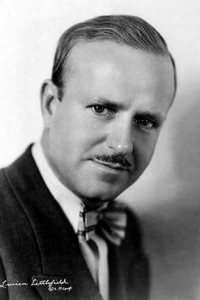 Texas-born character actor Lucien Littlefield (1895-1960) amassed nearly 300 screen credits over a 46 year career. He was one of those chameleon style actors in the vein of Lon Chaney, although Littlefield didn’t specialize in horror. But he disappeared into roles. His round, broad head permitted him to impersonate much older men, and he was often playing butlers, clerks, doctors, professors, and the like, roles that we might also associate with the later, better remembered Donald Meek. In serious films, he was often comic relief.

For more on classic film comedy, please read Chain of Fools: Silent Comedy and Its Legacies from Nickelodeons to Youtube.