This Day in 1944: The Hartford Circus Fire 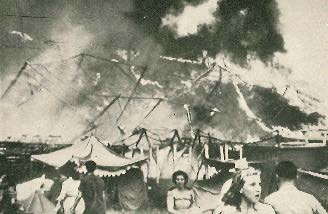 Well this is no less than our fourth post about a catastrophic conflagration, counting the aftermath of the 1906 San Francisco Earthquake, the Iroquois Theatre Fire, and Barnum’s Five Fires. We could hardly let this benchmark slip by, for the 1944 Hartford Circus Fire was the most disastrous one in circus history. What makes it most appalling was that it happened so RECENTLY, in the modern era. One is accustomed to reading about such disasters in the 19th and early 20th centuries, when large venues had been built but modern fire safety codes were not yet in place. But circuses were another matter. They traveled from state to state. Far from being fireproofed, the Ringling Brothers, Barnum and Bailey Circus tent was coated in paraffin and gasoline so that it would be WATERproofed.

The blaze was possibly started by a 16 year old mentally ill roustabout named Robert Segee, who subsequently confessed. (There were reasons to doubt his confession, however, so no one was ever officially charged, although several suspects were detained temporarily). The fire started on July 6, 1944 during the performance of The Flying Wallendas. Ringmaster Fred Bradna urged calm, but the estimated 7000 spectators stampeded, adding to the death and casualty toll. When it was over, at least 169 were dead and 700 were injured. The causes ranged from burning to asphyxiation to injuries sustained by being crushed or by having fallen from the top of the bleachers.

Armless and legless sideshow performer Frieda Pushnik was carried to safety by a fellow artiste. A 13 year old Charles Nelson Reilly was one of those in the audience, and was reportedly traumatized by the event, which he often wrote and spoke about later. Some of the victims remain unidentified to this day, including a mysteriously unclaimed little girl, known to posterity as “Little Miss 1565”. (The number assigned her by the local coroner). If Little Miss 1565 were alive today, she’d be about 80 years old. In the scheme of things, this was a very recent event.

But don’t worry about contemporary circus tents (yes, there are still some tented circuses, thank you very much). They are very highly regulated, and made of ungodly unnatural chemical substances you couldn’t burn if you tried. In this dangerous world, no doubt some people have.