Josef Swickard: From Cologne to Keystone 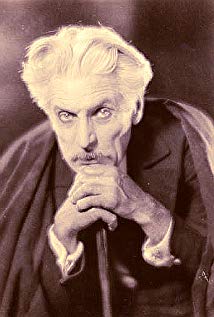 Josef Swickard (Peter Josef Schwickerath, 1866-1940) seems like a really unlikely guy to have wound up in in a lot of silent slapstick comedies. Just look at him! The aristocratic looking Cologne native was MADE for melodrama. But comedies need lots of those stuffy type guys for the clowns to swirl around and disarm and irritate, and those were the kinds of characters Swickard played for Mack Sennett when he first arrived in Hollywood after decades of traveling the globe with stock companies.

From 1913 through 1916 he appeared in some of the best remembered Keystone comedies. His first film was Cupid in a Dental Parlor (1913) with Fred Mace and Chester Conklin. With Charlie Chaplin he was in Twenty Minutes of Love, Laughing Gas, Caught in a Cabaret, The Property Man, The Face on the Barroom Floor, and the all-star Tillie’s Punctured Romance, all 1914. With Fatty Arbuckle, he’s in A Rowboat Romance, Lover’s Luck and Fatty and Minnie He-Haw  (all 1914). With Mabel Normand, he’s in Hello, Mabel (1914). With Arbuckle and Normand together: Mabel and Fatty’s Simple Life; Mabel, Fatty and the Law; and Mabel and Fatty’s Married Life (1915). Then there was Hogan’s Romance Upset (1915) with Charles Murray; Love, Loot and Crash (1915) with a young Charley Chase; as well as two with the young Gloria Swanson, A Social Club and Haystacks and Steeples, both 1916.

In 1917 he escaped from the slapstick comedy ghetto to appear in the melodrama features that were more his forte, although he did appear in two Larry Semon comedies, The Wizard of Oz (1925) and Stop Look and Listen (1926), and the feature Oh Mabel Behave (1921), which was composed of old Mabel Normand footage from the Keystone days. Besides this, he was in scores of dramatic films during the ’20s. Some of the best known include The Four Horsemen of the Apocalypse (1921), Don Juan (1926), and King of Kings (1927). In talkies (in part due to his accent) he was mostly a bit player, appearing in dozens more films through The Mad Empress (1939).

For more on silent film and classic comedy, please read Chain of Fools: Silent Comedy and Its Legacies from Nickelodeons to Youtube,