Russell Hicks: He of the Beef Steak MInes 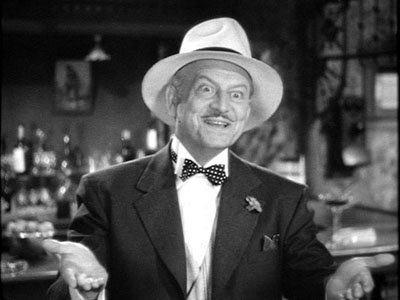 Russell Hicks (1895-1957) appeared in over 300 films, in all sorts of genres, but he’s probably best remembered by classic comedy fans in particular for his priceless turn as a flim flam man in W.C. Fields’ The Bank Dick (1940). He’s the guy who sells Fields shares in “Beef Steak Mines”. Hicks had a mellifluous voice, a smooth yet distinguished manner, and wore clothes well (see above) so he was always getting cast as attorneys, judges, army officers, politicians, and the like. His impersonal and somewhat “public” manner meant that he was almost always assigned minor supporting roles. He was seldom, if ever, cast as someone’s father or uncle, having heart-to-heart talks, or the like. He was much better at giving summations in crowded courtrooms.

Other comedy classics that benefited from Hicks’ polished presence included the Marx Brothers’ The Big Store (1941); the Abbott and Costello films Hold That Ghost (1941), Ride ’em Cowboy (1942), and Buck Privates Come Home (1947); the Laurel and Hardy comedies Great Guns (1941), and Air Raid Wardens (1943); Blondie for Victory (1942); Red Skelton’s remake of The Show-Off (1946), and Jiggs and Maggie in Court (1948). In 1934 he also appeared in a couple of shorts: Mushrooms, with Harry Gribbon and Cora Witherspoon; and My Mummy’s Arms, with Gribbon and Shemp Howard.

Hicks was taken at the age of 61 by a heart attack following an auto accident in 1957.

For more on classic comedy film, please read Chain of Fools: Silent Comedy and Its Legacies from Nickelodeons to Youtube.