Max Showalter a.k.a. Casey Adams: From Silents to “Sixteen Candles”

What a joy to have an opportunity to share with you my enthusiasm for kooky, breezy, cheerful, good-hearted, folksy, slick Max Showalter (1919-2000), who was billed for a time as Casey Adams. Showalter was above all a musical comedy man; he not only acted and sang, but played piano and wrote songs. But he could also be found in straight drama and vehicles of all types. With his beaming smile and raspy chuckle he was the perfect sort to play All-American True Believers: not the inventors or entrepreneurs, but the salesmen. His characters were usually sort of dim, but enthusiastic, optimistic. He was a company man in the big city, a Rotarian in the small town, all about the shined shoes, the fresh haircut, cheap cologne and a checked jacket.

Showalter grew up in Caldwell, Kansas, where his mother played piano in a local silent movie theatre. (This is a perfect background for acting in Inge; he later had a small cameo in the 1956 film of Bus Stop). He was only 16 when he began performing at the Pasadena Playhouse, acting in dozens of productions between 1935 and 1938. In 1938, billed as David Showalter, he made his Broadway debut in Knights of Song, a play about Gilbert and Sullivan directed by Oscar Hammerstein II and featuring Nigel Bruce and Monty Woolley. This was followed by Very Warm for May (1939), with book and lyrics by Hammerstein, music by Jerome Kern, direction and design by Vincente Minnelli, choreography by Albertina Rasch, and a cast that included June Allyson, Eve Arden, and Vera Ellen. That’s an all star team if there ever was one, but it only played a couple of months. Showalter toured with Irving Berlin’s This is the Army during World War Two, then returned to Broadway for a revival of Show Boat (1946-47), followed by John Loves Mary (1947-48), and Make Mine Manhattan (1948-49).

A small part in Milton Berle’s Always Leave Them Laughing (1949) was his first movie role. In the Jane Froman bio-pic With a Song in My Heart (1952) starring Susan Hayward, he and David Wayne played a vaudeville team, who perform a song called “Hoe That Corn” which Showalter had actually written. That same year he was in John Ford’s remake of What Price Glory? starring James Cagney. One of his first fairly large parts was opposite Marilyn Monroe and Joseph Cotten in Niagara (1953). He played a police detective in the horror film The Indestructible Man (1956) with Lon Chaney Jr. In 1957 he played Ward Cleaver in the pilot of Leave it to Beaver! What a very different show it would have been had they cast him in the series. Instead the producers went with the much less comical, fairly stern Hugh Beaumont for the run of the series.

In 1956 he released a record album Casey Adams Sings Max Showalter. He was frequently to be seen on television, on variety programs like The Milton Berle Show and on dramas like The Twilight Zone or sitcoms like The Loretta Young Show. Other movies included The Female Animal (1958), The Naked and the Dead (1958), Elmer Gantry (1960), Summer and Smoke (1961), The Music Man (1962), Sex and the Single Girl (1964), How to Murder Your Wife (1965), and Lord Love a Duck (1966), in which he had one of the most insane scenes ever put in an American film, as an incestuously inclined father who leers and cackles while his daughter (Tuesday Weld) tries on sweaters. It’s one of my favorite scenes in any movie, so strange that it is almost unbearable to look at. 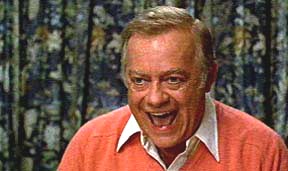 Showalter’s last professional years were some of his most prominent, probably because by now he was emblematic of another time, and came with a sheen of nostalgia. He was a regular on The Stockard Channing Show in 1980. (The show was short-lived but it was his only regular role on a series). You can also see him in the obligatory Love Boat episodes (1982-83), and the films Sergeant Pepper’s Lonely Heart’s Club Band (1978), Blake Edwards’ 10 (1978), Racing with the Moon (1984), and John Hughes’ Sixteen Candles (1984), his last movie and one of his most memorable for those of us of a certain age. That film also featured Edward Andrews, with whom Showalter had appeared in Elmer Gantry, in his penultimate role.

In 1985 Showalter supplied music for the short-lived Broadway show Harrigan ‘n’ Hart. He spent his last years in Connecticut, putting on shows as the local Ivoryton Playhouse, and creating oil paintings.

To learn more about show biz history, please read No Applause, Just Throw Money: The Book That Made Vaudeville Famous,