Barbara Pepper: From the Goldwyn Girls to Green Acres 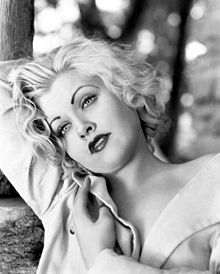 Barbara Pepper (Marion Pepper 1915-1969) had two distinct phases as a Hollywood character actress. In the first she was a devastatingly gorgeous sex symbol in the Jean Harlow mold. In the second, a stout, rough-hewn older woman. Rare for someone to have even one such working phase; to have had two was like hitting the jackpot twice.

Pepper’s father had been the front desk man at the Astor Hotel in Times Square. The Astor catered to the Broadway crowd; it undoubtedly fed the girl’s aspirations to be in show biz. At age 15 she auditioned to be a Broadway chorus girl. It’s often claimed that she was in the Ziegfeld Follies circa 1931 although she isn’t listed among the cast on IMDB; perhaps she traveled with a touring edition. But she definitely was in George White’s Music Hall Varieties (1932-33). This experience got her hired as one of the Goldwyn Girls in the movies. As such, you can see her in the Eddie Cantor comedies Roman Scandals (1933) and Kid Millions (1934). This is where she became friends with Lucille Ball, which would be a boon to her later in her career. Her earliest roles were as chorines and show girls in movies like Moulin Rouge, Bottoms Up and Strictly Dynamite, all 1934. This led to walk-ons as brassy, flashy dames, which then led to larger roles along the same lines. In 1936 she actually got a couple of female leads: in Mummy’s Boys with Wheeler and Woolsey, and in The Rogue’s Tavern with Wallace Ford. Most of her roles were walk-ons, however, with somewhat larger parts in B movies. Look for her fleetingly in The Women (1939), The Return of Frank James (1940), Foreign Correspondent (1940), Star Spangled Rhythm (1943) and the Abbott and Costello picture The Naughty Nineties (1945).

Aspiring to bigger parts, Pepper studied with Maria Ouspenskaya and acted in live theatre productions with her husband, B movie star Craig Reynolds, whom she had married in 1943. His death in a motorcycle accident in 1949 sent her into a downward spiral of depression and drinking. She gained weight. Roles were infrequent. She took menial jobs to make ends meet. Fortunately, her old friends from her early days stepped in to help her out. She got bit roles in The Eddie Cantor Story (1952) and in The Fuller Brush Girl (1950), starring her old friend from the Goldwyn Girl days, Lucille Ball. Pepper was also under serious consideration for the role of Ethel Mertz in I Love Lucy, but her drinking was deemed to be too much of a risk. However, she did make several appearances on the show between 1952 and 1955. During the same years she also frequently guested on The George Burns and Gracie Allen Show, The Jack Benny Program and many other television shows.  Jerry Lewis was also a particular fan, casting her in the films Rock-a-Bye Baby (1958), It’s Only Money (1962), Who’s Minding the Store? (1963), The Patsy (1964), and Hook Line and Sinker (1969). Other late films you can see her include Sex Kittens Go to College (1960), The Music Man (1962),  It’s a Mad Mad Mad Mad World (1963), My Fair Lady (1964), and Kiss Me Stupid (1964).

But we haven’t yet gotten to the role she is undoubtedly best known for today. 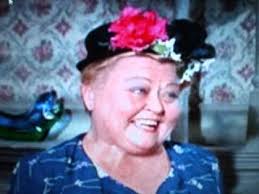 From 1964 through 1968, she played Doris Ziffel, the “mother” of Arnold the Pig on Petticoat Junction and Green Acres. This was a regular role; she was in 35 episodes between the two shows, and it was undoubtedly the most high-profile, sustained work she ever enjoyed. Unfortunately, she was in terrible physical shape by that point. She was only 54 years old when she died in 1969 of coronary thrombosis.

To learn more about show biz history please see No Applause, Just Throw Money: The Book That Made Vaudeville Famous, and for more on classic comedy, please read Chain of Fools: Silent Comedy and Its Legacies from Nickelodeons to Youtube.