Gertrude Selby: Flirty Gertie, Who Got Her Hands Dirty 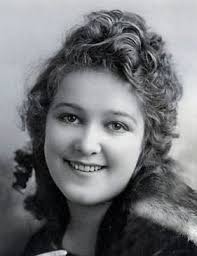 Prior to her brief but impressive screen career Gertrude Selby (1890-1975) had been in musical comedy, stock theatre and vaudeville, dancing with Gertrude Hoffman, appearing in Gus Edwards’ tab shows, and even touring the circuits as a single. Henry “Pathe” Lehrman saw her perform and hired her as his leading lady in 1914 when he left Keystone to start his own studio L-KO, giving her the same sort of roles that had been Mabel Normands’, feisty, attractive heroines who could scrap with clowns but still look good when their hair and clothes got mussed up. At L-KO Selby appeared with Billie Ritchie, Hank Mann, Fatty Voss, Henry Bergman, Charles Inslee, Alice Howell, Richard Smith, Dot Farley, Neal Burns, Harry Gribbon, Raymond Griffith, Billy Armstrong, Billy Bevan, Bert Roach, Reggie Morris, Louise Orth, and Lehrman himself. By Fall 1915 she was often starring in her own comedies under the screen name “Gertie”. L-KO was known for its roughhousing ways, and Gertie was game — she didn’t use a stunt woman.

Selby also expanded beyond the slapstick cul-de-sac as well. In September 1916 while still working for L-KO she starred in a melodrama The Small Magnetic Hand for the Rex Motion Picture Company. She also made one comedy for IMP (soon to become Universal) called A Desperate Remedy. For Universal she then starred in the three features, all crime thrillers: The Sign of the Poppy (1916), A Child of Mystery (1916) and A Double Room Mystery (1917). This would have been a huge step up in prestige, but she returned immediately to cranking out comedies. When Lehrman left L-KO in late 1917 to work for Fox Sunshine Comedies, Selby went with him. There she worked with Jack White, Lloyd Hamilton, Tom Mix, Jimmie Adams, Mack Swain, and Jack Cooper. She also teamed up with Neal Burns to make “Selburn Comedies” for the Piedmont Pictures Corporation. In 1918 she co-starred in the features Twenty One and Kidder and Ko with Bryant Washburn, then made several more shorts for Fox. She then co-starred in the Metro feature Easy to Make Money (1919) with Bert Lytell. In early 1920 her last three shorts were released by Jolly Comedies (an imprint of Thanhouser), and then she retired, having married Chicago department store heir Townsend Netcher the previous year. 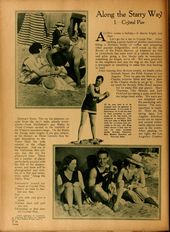 Only the brevity of her career accounts for Selby’s obscurity today. If she had kept working through the ’20s there is little doubt she would have gone on to bigger and better things. As it was, much like Mabel Normand and Fatty Arbuckle, she had already made several features with major studios at the time of her retirement. And unlike those two, there was no scandal attached to Selby’s name. This 1921 issue of Motion Picture Magazine (above) shows her on the beach with Rudolph Valentino and Mrs. Mahlon Hamilton (Aleta Farnum). (Mahlon Hamilton was another major star of the day). It’s said that Selby was also pals with Lillian Gish, who gave her the Gertie nickname.

Selby’s marriage to Netcher ended in 1928. She spent much of the early 1930s in Europe with her mother and sister, settling in New York on the eve of WWII. She later married a man named George Gashet and spent her remaining years living the life of a socialite.

To learn more about vaudeville, please see No Applause, Just Throw Money: The Book That Made Vaudeville Famous, and for more on classic comedy film shorts, please read Chain of Fools: Silent Comedy and Its Legacies from Nickelodeons to Youtube. And for more on the films of Gertrude Selby in particular see the books Mr. Suicide: Henry Pathe Lehrman and the Birth of Silent Comedy by Thomas Reeder and Slapstick Divas: The Women of Silent Comedy by Steve Massa, form whence some of the details in this post derived. Looks like you’ve got some reading to do!