George Gobel: You Had to Be There 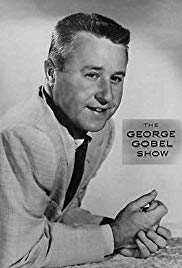 Anyone my age will be flabbergasted to know what a huge star George Gobel (1919-1991) was in the 1950s, or that he remotely had anything to offer.

I grew up in the 1970s, when Gobel was a frequent presence on game, talk, and variety shows, and garnered the occasional (pretty rare) acting role. He was a regular on Hollywood Squares from 1973 to 1980 (nearly 300 appearances), a frequent guest on The Tonight Show (56 appearances), and one also saw him on The Mike Douglas Show, Dinah!, Sonny and Cher, and Donny and Marie. He provided a voice for the animated Rankin-Bass ‘Twas the Night Before Christmas (1974), was in Joan Rivers’ Rabbit Test (1978), The Love Boat (1981), and Harper Valley P.T.A. (1981-82) with Barbara Eden. But when I was a kid, it was all very mysterious. “Who IS that guy?” we wondered. “How’d he con his way on to all these television shows?” He didn’t seem to be funny in any way that a kid understood, he was just this dry, understated midwestern guy in a crewcut. He seemed to be just filling a chair most of the time, an enigmatic non sequitur, as though the producers had accidentally let someone’s father onto the set. Could they find no comedians?

But that was part of the subversive joke of George Gobel. The thing is, to be in on it, you needed to have been there when he initially came upon the scene. But fortunately it’s possible to put the story together from watching old clips of his TV variety program The George Gobel Show (1954-1960). The first surprise is that Gobel is quite excellent when you have the context. He had the comedy style of a humorist (i.e., the guys who wrote for the printed page, e.g. George Ade or James Thurber) and also that of a clever radio comedian like Fred Allen, Bob and Ray, and others. His writing was carefully crafted and highly wrought (often by top notch guys like Norman Lear, Hal Kanter and Goodman Ace), but also he could come up with a hilarious ad lib with lightning speed. He was probably best suited to the monologue, which his TV show had allowed him to do, but his later career thrust him into different situations, which relied a bit on the public’s memory of his persona.

As for that (his persona), his character reminds me more than a little of Charlie Brown. He’s a sad sack whom bad things happen to. His nickname was “Lonesome George”. He often referred to his wife, dubbed “Spooky Old Alice”. Part of the gag is that he is SO low-key, so ordinary seeming, that it is jarring to see him in this show biz setting. In its own way it’s a very broad, bold, almost surreal comedy choice. While monologists like Gobel had been very much a part of vaudeville, they never would have been the HOST. But you can see the popularity of performers like him, Bob Newhart, Mort Sahl, and others as an early sea change in traditional show biz. Television was an intimate medium. You could work very small, in contrast with the earlier generation guys like Milton Berle, Red Skelton, Sid Caesar and others who chewed the scenery as though they were in a theatre. But on TV you didn’t have to play to the rafters, just the camera.

Naturally, Gobel had come out of radio, and believe it or not he started out as a country singer, billed as “Little Georgie Gobel” or “The Littlest Cowboy. For a time, the music, or the ghost of it, remained part of his act. He would start to play his guitar, then stop and start talking (that, too was very vaudeville — think Jack Benny or the Smothers Brothers).

For a time, the monster success of his TV show led to promising other avenues. In 1956 he starred in The Birds and the Bees, a remake of Preston Sturges’ The Lady Eve, directed by Norman Taurog and also featuring David Niven, Mitzi Gaynor, Reginald Gardiner, Fred Clark, Hans Conried, King Donovan, and Charles Lane. It proved a disappointment, as did his second and last starring film vehicle I Married a Woman (1958), with Diana Dors, Adolphe Menjou, and Nita Talbot. From 1957 through 1961, his production company Gomalco produced the sitcom Leave it to Beaver. From 1958 to 1961 he played major resort hotels in Las Vegas and Reno. In late 1961, he co-starred in the Broadway show Let it Ride, a musical based on Three Men on a Horse. After this, he came to be the George Gobel we described in the first paragraph, a sort of beached fish, who once upon a time, had his own pond.