A Tower of (Tyrone) Powers

Today being the birthday of Hollywood actor Tyrone Power (1914-1958), it seemed fitting for a long overdue explication of his distinguished lineage. Power was a fourth generation actor, and the third theatrical professional to bear his famous name (though not the last, as we shall see).

The dynasty begins with Irish actor/manager Tyrone Power (William Grattan Tyrone Power (1797-1841). His father is said to have been a landowner also named Tyrone Power. Born in County Waterford, the younger Power moved to Cardiff, Wales with his family when his father died. He was 14 years old when he ran away to join the theatre, starting out in supernumerary roles. By 1826 he was a supporting player at Covent Garden. When the leading Irish comedian of the day Charles Connor passed away, Power stepped into that niche, and that was his specialty for the rest of his career, although some have suggested that he made an effort to steer his characters away from the popular Irish stereotypes of the day. In the 1830s he began to write, perform, produce and publish his own plays, with titles such as Born to Good Luck, or the Irishman’s Fortune; How to Pay the Rent; St. Patrick’s Eve; Paddy Carney; Married Lovers; The Lost Heir and the Prediction; The King’s Secret; and The Gipsy of the Abruzzo. During this decade he made several trips to America to perform. As Dickens and Mrs. Trollope would later do, he recorded his observations and published them in book form as Impressions of America During the Years 1833, 1834 and 1835. Power was returning from one of his American tours in 1841 when the steamship he was sailing on, the SS President, foundered in a storm and was lost at sea.

This Tyrone Power’s youngest son was Harold Littledale Power (1833-1901). Harold was also a professional actor and singer, whose greatest success was in a play called Invitations, by Edmund Yates, produced at Egyptian Hall in 1862. He married the actress Ethel Lavenu, and left the theatre to become a wine merchant.

Harold and Ethel’s son was our next Tyrone Power (Frederick Tyrone Edmond Power, 1869-1931), known to posterity as Tyrone Power, Sr. As a teenager Freddie, as he was then known, was sent to Florida to learn the citrus business, but he ran away to join a stock company in St. Augustine. A case can be made that he was the most distinguished actor in this illustrious family. Throughout the 1890s he played in Shakespeare and other classics with Augustin Daly’s company. At the end of the decade he was with Mrs. Fiske’s troupe, with whom he performed in the original 1899 production of Becky Sharp, along with Maurice Barrymore. He appeared with Edgar Selwyn in Ulysses (1903) and with Julia Marlowe in When Knighthood was in Flower (1904, later made into a film starring Marion Davies). He starred in The Servant in the House with Walter Hampden, throughout 1908.

Power continued to appear on Broadway through the end of his life, most notably as Claudius in John Barrymore’s legendary 1922 production of Hamlet. At the same time, beginning in 1914 he also starred in movies. His first was an adaptation of Bronson Howard’s Aristocracy. Out of his 41 films, some of the more notable ones included Dream Street (1921) an early sound experiment by D.W. Griffith; Janice Meredith (1924) starring Marion Davies and W.C. Fields; Dorothy Davenport’s The Red Kimono (1925); and the landmark Raoul Walsh western The Big Trail (1930) with John Wayne, his only sound film. In 1931 he was preparing to star in a remake of George M. Cohan’s The Miracle Man (which had originally starred Lon Chaney) when he died of a heart attack. His soon to be famous son was with him at the time, just 17 years old. Tyrone Sr’s last role was the Duke in a Broadway production of The Merchant of Venice (1931). 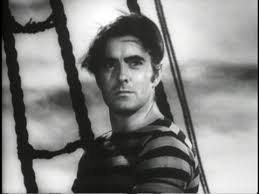 Now we come to the most famous bearer of the name (1914-1958). Tyrone Power, Jr. was raised mostly by his mother Patia Power (Helen Emma Reaume, 1882-1959). Patia was also an actress. She had appeared in plays with the elder Tyrone, and later taught drama. The couple divorced in 1920. Tyrone Jr was raised mostly in Cincinnati. When he graduated high school he went to join his father in Hollywood to see if he could help him break into acting. Sadly he only got to spend a short time with him before he died. He initially played bit parts in the films Tom Brown of Culver (1932), Flirtation Walk (1934) and Northern Frontier (1935). Seemingly at an impasse, he went to Broadway to gain some stage experience, appearing with Katharine Cornell’s company in Flowers of the Forest (1935), Romeo and Juliet (1936), and Shaw’s Saint Joan (1936). At this point he returned to Hollywood, where his role in Lloyd’s of London (1936) put him on the map.

Power’s extraordinary good looks were at once a blessing and a curse. On the one hand they turned him into a matinee idol. On the other hand, much like Errol Flynn, he tended to get roles that didn’t stretch his capabilities, or rather what he felt his capabilities were, and what his legacy as a member of the Power family ought to be. Power had lots of swashbuckling roles, but where was the Shakespeare? On the other hand, he didn’t seem to have the chops of his distant cousin Laurence Olivier, or even of another handsome leading man, Cary Grant, and he lacked even Flynn’s breezy, seemingly effortless charm. Power possessed a sort of level, steady earnestness however and it served him well for two decades in films like In Old Chicago (1938), Alexander’s Ragtime Band (1938), Marie Antoinette (1938), Jesse James (1939), Rose of Washington Square (1939), The Mark of Zorro (1940), Blood and Sand (1941), and The Black Swan (1942).

After serving as a marine pilot in World War Two Power returned to Hollywood with a new seriousness. Following a 1946 adaptation of Somerset Maugham’s The Razor’s Edge, he made the extraordinary Nightmare Alley (1947), which we wrote about here. Yet despite Power’s efforts to expand his range, Hollywood continued to cast him in swashbucklers like Prince of Foxes (1949) and The Black Rose (1950). At this stage Power went back to the theatre to get the kind of fulfillment he was seeking, in a British production of Mr. Roberts (1950), and then in an adaptation of Stephen Vincent Benet’s John Brown’s Body (1953), which played on Broadway and then on tour. By the mid 50s he seemed to have gotten what he wanted — a string of relatively substantive, mature films that honored his talent: John Ford’s The Long Gray Line (1955), Seven Days from Now (1957), The Sun Also Rises (1957) and Witness for the Prosecution (1957). In 1958 he starred in Shaw’s Back to Methuselah on Broadway. This was followed by the film Solomon and Sheba. Sadly, Power was 3/4 of the way through with shooting the picture in Spain when he died of a massive heart attack at age 44. But he’s not the end of the line.

The next Tyrone Power was born in 1959, a few months after the death of his father. Though he is actually Tyrone Power IV, and actually the sixth Tyrone Power and the fifth actor to bear that name, he uses the screen credit Tyrone Power, Jr. (which is the same credit his own father had used in the early 30s.) This Tyrone Jr. started out in prominent vehicles; he had small roles in Cocoon (1985) and Cocoon: The Return (1988) and a guest shot on Cheers (1989). In 1989 he appeared in Shag with Phoebe Cates, Bridget Fonda and Annabeth Gish. In 1991 he was in California Casanova with Jerry Orbach and Audrey Landers. Most of his 20 or so credits following this have been low budget productions with low star wattage. His most recent film was The Extra (2017) with John Saxon. Tyrone’s older sisters Romina Power and Taryn Power are also actors. He also has a son named Tyrone Keenan Power (1998). Will he carry on the family tradition? Time will tell.

But wait! There’s one more theatrical Tyrone in the family! Actor/director Sir Tyrone Guthrie (1900-1971), founder of the Guthrie Theater in Minneapolis, was also descended from the dynasty’s founder (his great-grandfather). Guthrie was the second cousin of the famous movie star.