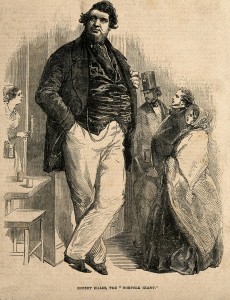 Some sources give 1813 as the birth year for Robert Hales, others 1820. He was born and raised in Great Yarmouth, Norfolk, the largest member of a large family of large people. His parents were both said to be over 6 feet tall, at a time when the average height in England was about 5’5″. His five sisters averaged 6’3″ in height, with two sisters (Mary and Anne) over or near seven feet. His three brothers averaged 6’5″. Robert Hales himself topped out at 7’8″.

A seaside town at the mouth of the River Yare, Great Yarmouth is all about boats, and like many in his area, Hales grew up operating wherries, shallow-draft, barge-like rowboats that carried cargo like coal for short distance delivery. At 13 he joined the Royal Navy, but by the time he was 17 he was discharged for being too tall. It was at this stage that he began to exhibit himself at local fairs and other events. In 1840 he met Queen Victoria and Prince Albert at Epsom Races; he was presented at court 11 years later.

In 1849 Hales went to America to appear in P.T. Barnum’s American Museum. He was with Barnum for two years, during which he married Irish Giant Eliza Simpson, was was advertised to be 8 feet tall. With Eliza he may have father a son named or nicknamed “General”. Nevertheless, in 1851 he returned to England without Eliza and married a woman named Maria Charlotte Webb, raising the spectre of bigamy. One source says that he became landlord of the Craven Head Tavern, Drury Lane, London for a time; another says he ran the Burgoyne Arms in Sheffield. In later years, he was plagued by ill health and returned to his native Great Yarmouth, where he died of bronchitis in 1863.

Sources for this post: The Great Yarmouth Mercury; BBC One; and Hales’ entry on the Find a Grave database.

For more on performing arts history, please see No Applause, Just Throw Money: The Book That Made Vaudeville Famous.