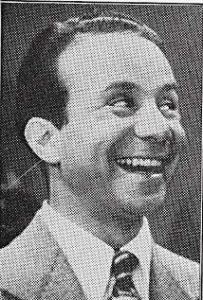 Singer Jack Heller (1906-1988), sometimes billed as Little Jackie Heller, started out as a popular vaudeville singer and a teenaged prizefighter, starting out in his hometown of Pittsburgh. During the ’30s, he began to get frequent work on radio along with a few bookings in movies. He sang in the 1930 musical film short The Clock Shop with Cliff Edwards, as well as the 1936 Jack Oakie comedy Florida Special, and the short Ship’s Concert (1937).

During World War Two, Heller entertained troops with the U.S.O. and appeared in the patriotic musical film The Yanks Are Coming (1942) with Henry King, Maxie Rosenbloom and Harry Parke. His last film appearance was in Morey Amsterdam’s Don’t Worry, We’ll Think of a Title (1966). During his last decades Heller performed in Las Vega.

“…my dad [sitcom writer Herbert Finn] and his writing partner went to one of his shows. Jackie announced that he had two celebrities from Hollywood in the audience that night, and then asked my dad and Alan Dinehart (which he pronounced as Dinnhart!) to stand up. Alan whispered to my dad, ‘If we’re celebrities…he’s in trouble!'”

Heller died in Vegas at the age of 82.

To learn more about vaudeville and trad show business, please see No Applause, Just Throw Money: The Book That Made Vaudeville Famous