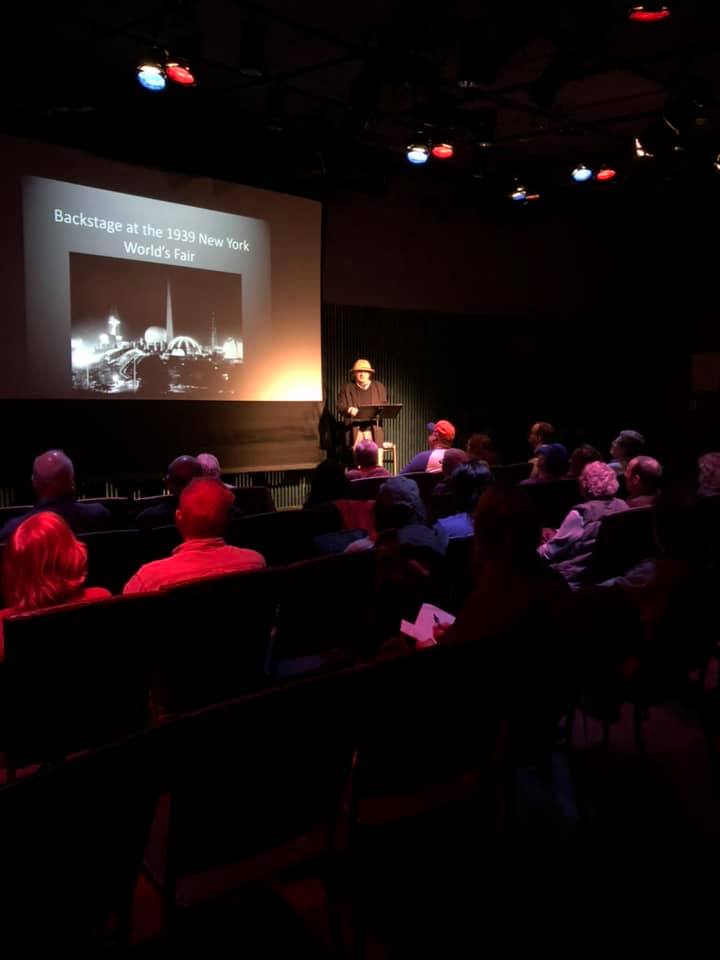 This post is adapted from a talk I gave at the Queens Theatre on April 28, 2019. The present post is a very truncated version and includes only a couple of the 120 or so images I used in my slideshow. For great photo spreads, see 1939nyworldsfair.com ,  6sqft, the Museum of the City of New York, and the New York Public Library. I’ll also have some other links to some other articles and resources below. 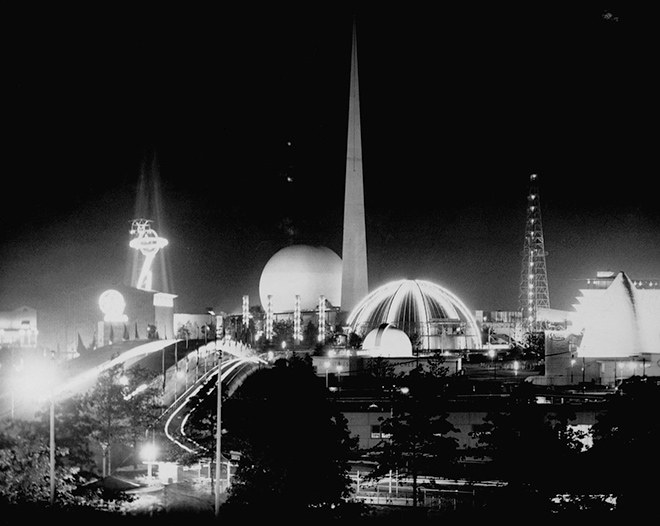 80 years ago today, April 30 1939, the New York World’s Fair opened at Flushing Meadows. This talk/ post concentrates on just on one aspect of the fair: performing artists, most of whom were concentrated in one of the fair’s seven main sections, called the Amusement Zone. As I’ve already written about many of the folks I included in the talk here I will link to my previous posts on them; just follow the links to learn more.

The 1939 world’s fair was far from the first. It wasn’t even the first one in New York City, and it wasn’t the biggest ever, although it was the second biggest. For some context on previous worlds fairs see my previous post here. I’ll be adding another post o the topic here on Travalanche as well in about a week.

Seeing the success of the 1933 Worlds Fair in Chicago, a committee of businessmen chaired by former NYPD commissioner Grover Whelan proposed one for NYC, helped by Mayor Fiorello Laguardia,  parks commissioner Robert Moses, and p.r. wizard Edward Bernays. The future was the theme of this one, with its World of Tomorrow, Futurama, and distinctive Trylon and Perisphere. That stuff is often (almost invariably) what is talked about with reference to this fair. Our poster boy for the fair’s futurism is Elektro the Robot, later the star of the 1960 movie Sex Kittens Go to College: 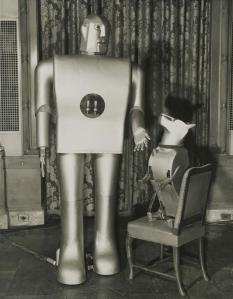 But that’s not what we’re talking about today. Counterintuitively, because of timing, the 1939 World’s Fair also ended up preserving or extending several traditional forms that were on their way out: Vaudeville, burlesque, sideshow, live theatre in general: all either dead, dying, or in peril as this time. With talking film and television coming into being, many speculated that live theatre would cease to exist entirely. The big time vaudeville circuits had died in 1932. The Depression and Talkies had nearly killed Broadway in the worst years of the 1930s. Mayor LaGuardia outlawed burlesque in NYC in 1937. And in his book Freak Show, Robert Bogdan gives the year 1940 as the year that the form of the freak show was “on the ropes” thanks to that damned interceding medical establishment.

But the World’s Fair bought a little extra time for these art forms. For some performers, it was a kind of bridge until they could grab their next lifeline: the U.S.O., which employed hundreds of performers through the mid 1940s.

And now let us enter the Amusement Zone! Never mind the World of Tomorrow…let’s talk about the World of Yesterday!!

John Hix: Strange As It Seems Sideshow: Hix was a competitor to Robert Ripley. He launched a comic strip about oddities in 1928 and a radio show in 1935. His concession had 100 feet of frontage, and was 150 foot deep. There were 14 stages, each with two acts, which you walked through it. The 32 acts included: 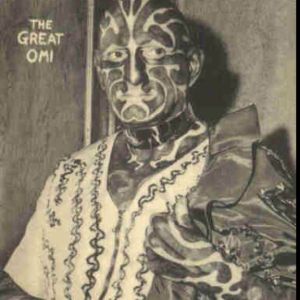 The Great Omi. Read more about him here. 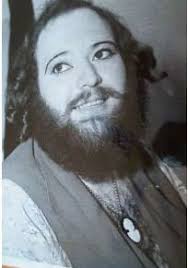 “Bearded Lady” Frances Murphy, who later turned out to be a man (see chest hair) 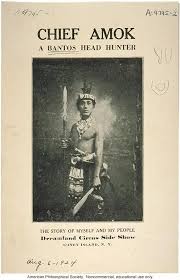 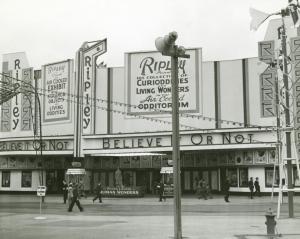 Ripley’s Believe It Or Not joined the fair during its second year. The original Believe it or Not Odditorium was at the 1933 Chicago, and one had recently opened in Times Square. The Flushing one featured Willard the Man Who Grows and the Human Blockhead Melvin Burkhart, along with a couple of dozen other performers. 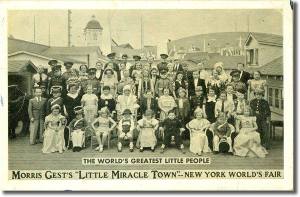 Morris Gest’s Little Miracle Town. Broadway producer Gest underwrote this town of little people at the fair. It should be noted that such villages had been a staple at places like Coney Island for at least half a century by that point. It was literally a small town full of miniature houses and stores, inhabited by dozens of little people (then called dwarves or midgets). The Viennese troupe Hermine’s Midgets also took part. During World War Two some were captured by the French and held as prisoners of war, as preposterous as that may sound.

Some other sideshow and midway related stuff at the fair:

Nature’s Mistakes: a concession of born different barnyard animals (i.e. pigs, cows, sheeps, goats, and chickens with missing or extra limbs, horns, organs, and heads, conjoined twins, and so forth).

“Frozen Alive”: Annette Delmar and other scantily clad “ice girls” were encased in blocks of ice for periods of up to 20 minutes, in a stunt not unlike one later perpetrated by David Blaine.

The Wall of Death: motorcycle thrill show where guys rode motorbikes up a 20 foot wall. One of them perished during the fair, due to a collision. 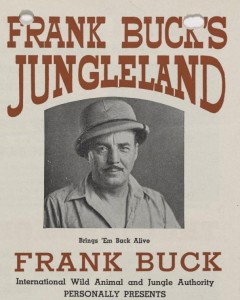 Frank Buck’s Jungleland, a menagerie with 5,000 animals, was a hit of the fair. Sadly several of Buck’s specimens perished en route to the fair due to a storm at sea. He had a whole herd of elephants, giraffes, camels, zebras, apes and a literal mountain of monkeys. Austrian lion tamer Captain Proske was also there with his big cats, Buck also had giant cobras and pythons, which brought him into conflict with the Giant Monsters exhibition, which was contractually supposed to have the fair’s monopoly on snakes. 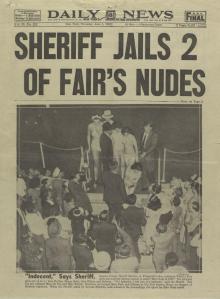 It may sound surprising at first that exhibitions of naked and near naked women were part of a family oriented festival, especially when we remember that Mayor Laguardia has shut down New York’s burlesque theatres only two years before. But several things must be taken into account. 1) Such exhibitions had ALWAYS been part of world’s fairs. They original in France after all! Little Egypt and similar belly dancers had come out the 1893 Chicago World’s Fair. 2) Girl shows and peep shows were also a staple of county fairs and carnivals all over the U.S. and: 3) the fair desperately needed to rent out all its concessions and sell tickets. It was the height of the Great Depression and much was staked on the financial success of the fair. In such cases, a “deal with the devil” is struck, and it is understood that the exhibitors will only go so far and no further. On a few occasions however, lines were crossed, as the Daily News headline above attests. Highlights of this section of the fair included:

The Crystal Palace: A recreation of New York’s 19th century Crystal Palace, site of a World’s fair in 1853. Broadway designer Norman Bel Geddes presented a troupe of “Crystal Lassies”, and a revue that included fan dancers, bubble dancers, a Little Egypt impersonator, and Rosita Royce and her Dance of the Doves. Also Faith Bacon, originator of the fan dance, performed at the fair, and was arrested for efforts. And Tirza is said to have premiered her Wine Bath here!

The Congress of Beauty and Colony of Naked Sun Worshippers: a production of Nils T. Granlund, popularly known as NTG. In addition to his burlesque revue, his concession also had an outdoor “nudist colony”, where gawkers could get an eyeful of topless women hanging around in an enclosure.

The Bendix Lama Temple: this was a full scale replica of an 1767 temple from Manchuria. When attendance was disappointing, in the second year they installed a girlie show.

Salvador Dali’s Dream of Venus: a surrealist funhouse designed by the great artist himself. Also considered a part of the girlie area, as it had several topless women in surreal tableaux, floating in swimming pools, lying on a bed of lobsters, etc. One was covered in body paint to look like a piano keyboard. There’s a great photo spread of it here.

Living Magazines: Featured 8 minute show of tableaux, consisting of famous magazine cover photos inhabited by topless women. Then for a fee you could photograph them. 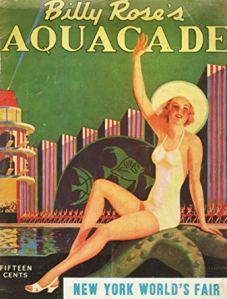 Billy Rose’s Aquacade: This famous aquatic revue was staged in large swimming pools featuring Busby Berkley like chorus formations. It was produced by the great Broadway impresario Billy Rose (you may remember scenes about it in the 1974 movie Funny Lady; Rose was Fanny Brice’s second husband. He left Brice for one of the swimmers in the show Eleanor Holm, who became his second wife). Staged by John Murray Anderson, the show also featured Gertrude Ederle (first woman to swim the English channel), Olympic swimmers Buster Crabbe and Johnny Weissmuller (both of whom would later play Tarzan in B movies) and Esther Williams, who would later star in movie musicals featuring aquatic dance numbers very much like the ones in this show. There is terrific video of Billy Rose’s Aquacade on Youtube at this writing. I highly recommend investigating it (I no longer link to Youtube as the links always go dead). 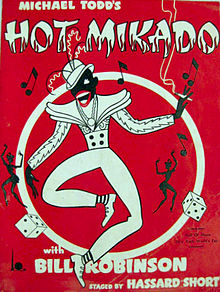 The Hot Mikado: Mike Todd also brought another show to the 1939 New York World’s Fair. This one was even more brazen. Todda had seen a production in Chicago called The Swing Mikado, an all-black jazzy version of Gilbert and Sullivan‘s Mikado. So he stole the idea and presented his own version called The Hot Mikado on Broadway. Then the Chicago production came to New York and opened across the street. So Todd Brought The Hot Mikado to the World’s Fair and presented it in the Worlds Fair Music Hall. It starred Bill “Bojangles” Robinson and was one of the hits of the fair.

The American Jubilee: Another Broadway quality show at the fair was American Jubilee with songs by Arthur Schwartz of Dietz and Schwartz and Oscar Hammerstein. It was a patriotic pevue installed not in the Amusement Zone but in the USSR’s pavilion, which they had vacated due to the advent of the Second World War. Dancers in the show included Lucille Bremer, Lucy Monroe (daughter of Anna Laughlin), Irene Christie, Evonne Kummer, Jane Johnston, Patricia Deering, Janice Palmerson, and Paul Haakon. There was also a number of trick bike riders, including Tiny Tina Regat.

George Jessel’s Old New York: Vaudeville and Broadway star and Hollywood producer George Jessel presented an entire section of the park made to resemble the Bowery and Five Points of the 1890s, complete with a saloon variety show with can-can girls.

In addition to their national pavilions in other sections of the fair, several nations set up venues in the Amusement Zone that showcased music, dance and theatre of their countries, usually in a restaurant or cabaret environment. The Cuban Village featured a nightclub called Sloppy Joe’s, produced by Harry Dash where Lily Tossas (and many others) danced. There was also a Merrie England, a Holland in New York, and an Amazon venue. The Ballantine [Ale] 3 Ring Inn featured a string ensemble, a musical octette and Herr Louie and the Hungry 5. Harlem’s Moe Gale contributed a version of his Savoy Ballroom, where people like Harvey Lembeck jitterbugged with the Dancing Carrolls.

Walt Disney attended the fair, fresh off the success of his first feature Snow White and the Seven Dwarfs, looking for new worlds to conquer. It’s safe to say the 1939 World’s Fair gave him many ideas that were incorporated into Disneyland (1955), Walt Disney World (1973) and Epcot Center (1981).

The 1939 World’s Fair also bequeathed to the world two important rides that came to Coney Island after the Fair was over, the Bobsled roller coaster, and the Parachute Jump, the latter of which remains there today.

Go here for a talk I gave at the Coney Island Museum about the impact the various World’s Fairs made on Coney Island.