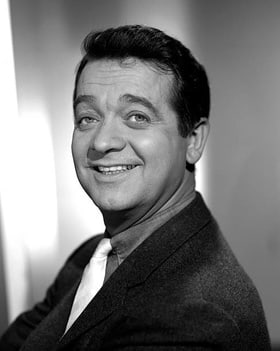 In my book, the lede in any story about Tommy Noonan (1921-1968) is that he co-wrote, produced and co-starred in Promises! Promises! (1963), the first mainstream American film in which a major Hollywood star (Jayne Mansfield) appeared nude. (It as directed by King Donovan, Imogene Coca’s husband). Noonan followed this up with Three Nuts in Search of a Bolt (1964) starring Mamie Van Doren, which he also directed. When we recall that Noonan played Marilyn Monroe’s nerdy boyfriend Gus in Gentlemen Prefer Blondes (1953) a gestalt begins to take shapely shape. The guy hit the trifecta of Hollywood’s top blonde sex symbols. (If Marilyn had lived, Something’s Gotta Give would have been the first picture to feature nudity. I’m sure she would have been Noonan’s first choice for his two films, although that would have been a tough get). At any rate, while Russ Meyer had certainly shown nudity in his films prior to this, Noonan was the first entrepreneur to showcase actual stars disrobing.

Noonan was an absolute creature of show business. He was the son of vaudeville comedian from County Galway, Michael James Noonan. He started out performing in theatre with his half-brother, John Ireland in 1934 (Ireland went on to become a better known film actor than Noonan). Noonan was cast as one of the kids in Boy’s Town (1938) but his film career began in earnest in the mid 40s, with movies like George White’s Scandals and Dick Tracy, both 1945. He amassed 66 screen credits as an actor over the next couple of decades. Just as notably, he became the stage and screen partner of Peter Marshall (of Hollywood Squares) from the late ’40s through the early ’60s. Noonan was usually a bit player in movies, although occasionally better parts came along in films like I Shot Jesse James (1949) and A Star is Born (1954).

Noonan’s first outing as an auteur was The Rookie (1959), which he co-wrote, produced, and co-starred in with Marshall. Directed by George O’Hanlon, it also featured Julie Newmar, Joe Besser, Jerry Lester, Vince Barnet and Claude Stroud. His next movie, Swingin’ Along (1961), with Barbara Eden, was also his last collaboration with Marshall. Noonan’s final film, Cotton-Pickin’ Chickenpickers (1967) starred country singer Del Reeves and also featured Slapsie Maxie Rosenbloom, Lila Lee, Sonny Tufts and Miss Denmark Greta Thyssen. It was the last film of Noonan, Lee and Tufts. Noonan was also producer.

Noonan’s second wife was Carole Langley, known professionally as Pocahontas Crowfoot. Noonan was only 46 years old when he died of a brain tumor.

To learn more about vaudeville and burlesque, please see No Applause, Just Throw Money: The Book That Made Vaudeville Famous,