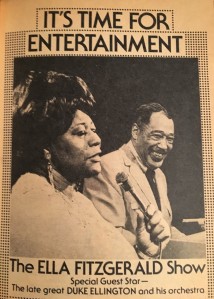 Here’s a head-scratcher: I found this ad for an Ella Fitzgerald (1917-1996) variety special from a TV Guide from the early ’70s, but can find no reference to the show online, including IMDB. There is a danger in relying completely on electronic archives; they are clearly incomplete. At any rate, her birthday affords an occasion for a few interesting factoids about the singer, who was still very much a presence in popular culture during the first 30 years of my life.

Fitzgerald was born in Virginia and raised in Yonkers, New York until the age of 15 when her mother died in a car accident. She went to live in Harlem with relatives and (though previously an excellent student) briefly ran with a criminal element, and was sent to reform school. Music was her path out. She was a fan of Earl “Snakehips” Tucker, Bing Crosby, Louis Armstrong, and above all Connee Boswell of the Boswell Sisters, whom she consciously strove to emulate. In 1934 (age 17) she participated in Amateur Night at the Apollo and took first place. The following year she was hired to be the singer with Chick Webb’s Orchestra, performing frequently at Harlem’s Savoy Ballroom. Her biggest hit of these years was “A-Tisket, A-Tasket” (1938), which she co-wrote. In 1939, Webb died, but Ella continued to front the band through 1942. That year, she appeared in the Abbott and Costello movie Ride ‘Em Cowboy.

In the mid ’40s, the be bop years, she developed her distinctive, patented style of scat singing, using her voice as though it were a jazz instrument. This became her trademark for the rest of her career, earning her enormous respect from pop royalty like Frank Sinatra and Tony Bennett. In addition to her live performances and critically-acclaimed record albums, she appeared in three more films: Pete Kelly’s Blues (1955) by Jack Webb, St. Louis Blues (1958), and the ensemble drama Let No Man Write My Epitaph (1960) with Burl Ives, Shelley Winters, James Darren and Ricardo Montalban.

When I was a kid growing up in the ’70s and ’80s she was on television all the time, appearing on talk and variety shows, and doing commercial endorsements, most famously for Memorex audiocassettes — a product just as dated now as big band music seemed to us back then!