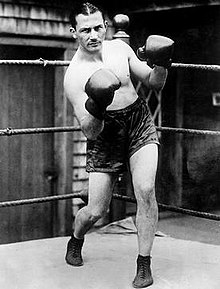 Jewish sports legend Benny Leonard (Benjamin Leiner, 1896-1947) also dabbled in vaudeville and silent film. Considered by many to be one of the greatest boxers of all time, he was the world lightweight champion from 1917 to 1925.

Born of Russian Jewish parents on the Lower East Side of Manhattan, Leonard learned to scrap with local boys as a matter of self defense. His neighborhood origins gave him one of his nicknames, “The Ghetto Wizard”. One can’t help but wonder if he were one of the inspirations for Joe Bonaparte in Clifford Odets’ Golden Boy.

Leonard’s first film was the adventure serial The Evil Eye (1920). The remainder of his pictures were all boxing stories where he played thinly veiled versions of himself: Flying Fists (1924), and Breaking In, Hitting Hard, Soft Muscles, The Come Back, The Surprise Fight, and The Jazz Fight, all 1925. In 1925 he retired from boxing and went on the lecture and after dinner speaker circuit, and performed in vaudeville on the Orpheum Circuits and elsewhere. (One finds references to him appearing in vaudeville prior to his retirement, as well, such as the all-star NVA benefit in 1917). Another vaudeville association: Leonard was reportedly one of the backers of early Marx Brothers productions, as Groucho mentions in Charlotte Chandler’s Hello, I Must Be Going, saying that he underwrote the scenery for their late vaudeville tab show “On the Mezzanine” and their Broadway revue I’ll Say She Is. Leonard is also said to have appeared in a 1927 production of Battling Butler, the vehicle originally cooked up for Jack Buchanan and made into a movie by Buster Keaton.

Leonard lost his shirt in the Stock Market Crash in 1929, and was forced to attempt a doomed comeback in boxing in 1931 and 1932. After this, he worked as a trainer and a referee and served in World War Two. He died of a heart attack while reffing a bout at the St. Nicholas Arena in April 1947. He was only 51.

To learn more about vaudeville, please see No Applause, Just Throw Money: The Book That Made Vaudeville Famous, and for more on silent film, please read Chain of Fools: Silent Comedy and Its Legacies from Nickelodeons to Youtube