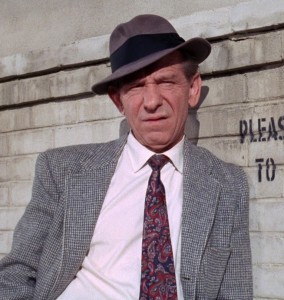 Beloved character actor Ned Glass (1906-1984) is best remembered from two highly visible turns in the early 1960s: as Doc in West Side Story (1961) and as Gideon in Charade (1963). I was already crazy about this little, bald, New York guy from these and other later performances. Imagine how excited I got when I noticed that he was also in Columbia comedy shorts with The Three Stooges, Buster Keaton and Andy Clyde three decades earlier!

Glass was a Polish Jew, born in what was then part of the Russian Empire. He emigrated to the U.S. as a child, and appeared in vaudeville before making his Broadway debut in Elmer Rice’s Counselor-at-Law (1931-33). In 1936 he directed Living Newspaper productions for the Federal Theatre Project. A bit role in True Confession (1937) was his first movie work. Bit parts in features and bigger roles in those comedy shorts made up the bulk of his work in the 1930s and ’40s.

In the ’50s he began doing television, including a recurring role on Sgt. Bilko with Phil Silvers. He’s in The Caddy (1953) with Martin and Lewis. He’s in some Elvis movies. He was a regular on the short-lived sitcom Fair Exchange (1962-63) with Eddie Foy Jr and Judy Carne. He had recurring roles on Ben Casey, Please Don’t Eat the Daisies and Mr. Terrific. He was a regular on Julia and Bridget Loves Bernie. He guested on The Monkees, The Night Stalker and Barney Miller! He played agents, accountants, plumbers, various sorts of complaining sad sacks, frightened clerks, and go-nowhere bottom feeders. Somehow, in his day, that seemed representative of New York.

Ned Glass was always a welcome contributor to anything he was in, but I’ll always associate him with my favorite line in West Side Story: “War councils! You couldn’t play basketball?” His delivery of that line captures his appeal in a nutshell.

To learn more about vaudeville, please see No Applause, Just Throw Money: The Book That Made Vaudeville Famous, and for more on classic comedy film, please read Chain of Fools: Silent Comedy and Its Legacies from Nickelodeons to Youtube