On the Universally Beloved Pearl Bailey

I received my introduction to the charms of singer and actress Pearl Bailey (1918-1990) at a tender age — she briefly had her own TV variety show, The Pearl Bailey Show as a summer replacement series in 1971. My mother had been a fan of hers for decades by that point — she adored her. And Bailey had one of those universally accessible personalities, thoroughly appealing to even a six year old, as I was at the time. Not only did she sing old American standards everyone knew, but she was funny and she had this bright personality. A light seemed to shine out of her eyes. She was perpetually smiling and laughing. She affectionately and familiarly called everyone “honey”. There was an amusing, leveling effect to this “honey” strategy. You’re instantly best friends. But you’re also yanked down off whatever pedestal you’re on. I wouldn’t be the slightest bit surprised to hear she called the President (she knew several) “honey”.

Bailey had grown up in Newport News and Norfolk, Virginia, the daughter of a preacher. Her older brother Bill Bailey (1912-1978) was the first of her family to break into show business, as a tap dancer. Pearly would later be associated with the old 1902 classic “Won’t You Come Home, Bill Bailey?” surely in partial homage to him. Pearl began performing as a teenager in black vaudeville and nightclubs, initially with Washington DC as a base. Early on, she won singing competitions the Pearl Theatre in Philadelphia and the Apollo Theatre in Harlem. In the early ’40s she toured with the U.S.O. and sang with Cab Calloway’s and Duke Ellington’s bands.

Things turned a corner in the mid ’40s. She did her first Broadway show, St. Louis Woman (1946) and her first Hollywood film Variety Girl (1947). In 1950, she released Pearl Bailey Entertains, the first of nearly three dozen albums she would record over the next two decades. In 1952 she married Italian American jazz drummer Louie Bellson, making them one of show business’s first interracial couples. In the eventful year of 1954 she appeared in the movie Carmen Jones and the Broadway show House of Flowers. In the late ’50s she appeared in the films St. Louis Blues (1958) and Porgy and Bess (1959).

In the ’60s and ’70s Bailey refined her image even more by starring in Broadway and touring productions of Hello, Dolly. While we’re apt to associate the role of Dolly Levi with Carol Channing (and later Barbra Streisand and Bette Midler), Louis Armstrong had helped to reorient the title song with a hit single in 1963. Though the musical is set in Yonkers, there’s something kind of “New Orleans” about having Louie Armstrong or Pearl Bailey interpret it. It was this quality of nostalgic Americana she brought to that variety show I mentioned. And it helps explain something that might bewilder a lot of people: the fact that she was a staunch conservative Republican and an ally of Richard Nixon, who made her his “Ambassador of Love”. (Shouldn’t that be a job for Prince?). Bailey quipped at the time: “What the world needs now is more love and less paperwork.” Seemingly inarguable, though it becomes less so when you contemplate it in the context of the times.

In 1968 she penned her autobiography The Raw Pearl, the first of a half dozen books she would come to write. She was a frequent presence on tv variety shows and specials and commercials throughout my kidhood in the ’70s and early ’80s. She was in a 1982 TV version of The Member of the Wedding in the Ethel Waters role. Her last role was in Blake Edwards’ Peter Gunn reboot in 1989. Her last book Between You and Me: A Heartfelt Memoir on Learning, Loving, and Living, came out that same year.

Now, in looking for images for this post, I was reminded of that little homily the Wizard of Oz says to the Tin Man: “A heart is not judged by how much you love; but by how much you are loved by others”. As I said at the top of the post, EVERYONE loved Pearl Bailey. As testament, I kept seeing these pictures of her very happy duets with other showfolk. Just a few I came across: 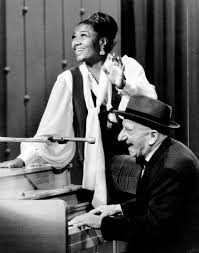 With Tony Bennett (apparently during his Chico Marx phase): 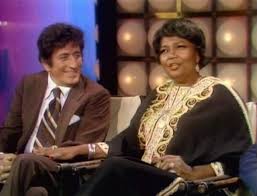 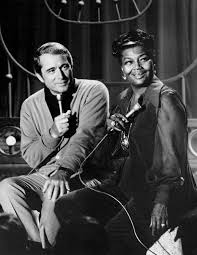 To learn more about vaudeville, please see No Applause, Just Throw Money: The Book That Made Vaudeville Famous,.