“Dennis the Menace” on Page and Screen

If you’ve had the grave misfortune to be named Dennis any time after March 1951, you’ve had ample reason to curse Hank Ketcham (1920-2001). I’ve never known anyone named Dennis who wasn’t nicknamed “the Menace” at least once, usually affectionately but I’m sure that’s no consolation. There’s nothing wrong with it, it just gets old real quick, particularly if you don’t happen to be a menace.

Interestingly, Ketcham started his career as an animator, for Walter Lantz and Walt Disney (he worked on Pinocchio, Bambi, Fantasia, and several Donald Duck shorts. Ironically none of the animated adaptations of his own strip would be up to that level). The character of Dennis was based on his real son, Dennis, from whom Ketcham was later sadly estranged. (The first Mrs. Ketcham, Dennis’s mom, died of a drug overdose when the boy was 12. His dad married his secretary three weeks later and they moved to Switzerland, but Dennis was sent to boarding schools. He later served in Vietnam and came back with PTSD. Not a happy story, but I’d still like to see it done as a comic. I know — we’ll call it Doonesbury!)

Naturally, none of that (death, mental illness, broken family) is in the comic strip, which concerns the travails of a cheerfully mischievous little boy who seems constitutionally unable not to cause havoc. He has two affluent, indulgent, and admirably thin parents (the father, like Steve Douglas on My Three Sons, is an aerospace engineer. Sure! Everyone has THAT job!) His dog Ruff is an unwitting collaborator in chaos, usually involving mud. His other kid friends include Joey, a younger sidekick, and Margaret, a know-it-all girl in glasses. And, the hub of the entire strip as far as most people are concerned: the retired neighbor Mr. Wilson, Dennis’s comic foil, who only wants a little peace and quiet but never gets it. It’s very much a snapshot of the time and place in which it was created, suburban, post-war America. And yet one can’t help having nostalgia for a time when a kid could possess a slingshot without being surrounded by two dozen policemen in black Kevlar, then transported in a bio-containment vehicle to a re-education facility for a 17-month program of violence counseling.

Dennis the Menace of course exploded in popularity, in fact, remains popular a quarter century after Ketcham stopped drawing it, and a couple of decades after he died. We’ll return to why it was a success ultimately, but first, as a measure of its success, we’ll talk about its adaptations.

CBS developed this live action sitcom to replace Leave it to Beaver, which had moved over to ABC. The show starred Jay North (who later worked the lecture circuit talking about his rotten life as a child actor) played Dennis. Herbert Anderson and Gloria Henry were his parents. Joseph Kearns played Mr. Wilson. When he died prior to the last season, Gale Gordon came in and played his brother. By 1963, North was 11, and tall for his age. Dennis was supposed to be 5. The show was kind of preposterous at this stage — I think it was inspiration for Martin Short’s hilarious SCTV sketch Oh That Rusty! Rather than recast the part, they ceased production and put the show into syndication.

The ad (above) for this animated TV special is what prompted this post. There’s something significant about the title given the fate of Dennis Ketcham’s real mother, I think.

This animated kid’s show ran in syndication the first season, and CBS Saturday morning’s the second. SNL‘s Phil Hartman did the voice of Mr. Wilson! Commendably, the creators have incorporated a couple of friends of color into Dennis’s neighborhood gang.

An obscure live action artifact, made for television.

This is undoubtedly the best known version, nowadays, written and produced by John Hughes and directed by Nick Castle. Its most memorable aspect by far is Walter Matthau as Mr. Wilson, who looks very much like Ketcham’s conception of him in the strip. Things being what they are, the movie plays like a mash-up of Hughes’ Home Alone franchise (which launched 1990), and The Grumpy Old Men films (which started in 1993). A big budget studio release, it has some major heavy hitters in the cast: Joan Plowright! Paul Winfield! Great character actors like Christopher Lloyd! Arnold Stang! Billie Bird! A very young Natasha Lyonne as one of the kids! With Lea Thompson as the mom, Robert Stanton as the dad, and young Mason Gamble as Dennis. The film is not precisely what one could describe as “good”, but it grossed over a hundred mil at the box office.

“All new”? We’ll be the judge of that. This animated series was by the same folks who produced the earlier one back in the ’80s, probably herein revived in an attempt to get some traction from the live action film hit. Voiceover legend June Foray does the voice of Mrs. Wilson! 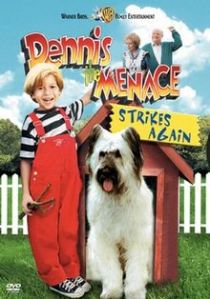 Despite the success of the 1993 live action movie its sequel was straight to video. Still, the cast included featured Don Rickles as Mr. Wilson, Betty White as his wife, George Kennedy, Brian Doyle-Murray and Carrot Top! Dennis was Justin Cooper. 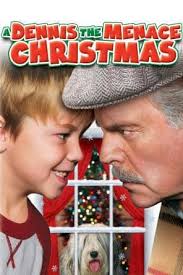 Well, this was probably inevitable. This one casts Mr. Wilson as Scrooge in A Christmas Carol, quite a natural riff in terms of cranking out entertainment fodder, though a half hour would be more tolerable than feature length for such a thing. The knowledge that Robert Wagner and Louise Fletcher played the Wilsons makes me feel old indeed.

You’ve noticed that none of these adaptation are classics exactly. Most of them seem craven attempts to make hay out of the success of other naughty boy franchises, with an undercurrent of “Hey, let’s not forget about the original naughty boy!” The thing is, he is NOT, particularly when it comes to live action film. Our Gang was in full gear a quarter century before Dennis debuted, the Katzenjammer Kids a half century, and Tom Sawyer and Huck Finn three quarters of a century. People love comedy about kids getting up to mischief but Dennis the Menace has never held the monopoly on that. To my mind what sets the franchise apart is how Ketcham drew the strip itself — the economy of his flowing lines, the expression of his characters — above all Mr. Wilson, a great comic creation. There can be no comedy at all without He Who Gets Slapped.