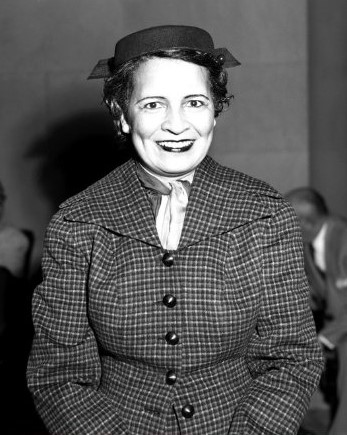 Bessie Allison Buchanan (1902-1980) had two remarkable careers. Since one of them was in show business we celebrate her here.

Her born name was Bessie Allison, though her circumstances in life were quite different by the Titanic victim of that name. Born in Petersburg, Virginia she moved to New York City with her family when a child. Throughout the twenties and early thirties she worked as a Harlem-based performing artist, playing roles in some of the seminal African American driven shows of the day. Her credits included the shows Shuffle Along (1921), Runnin’ Wild (1923-24), The Plantation Revue (1925), Deep River (1926), Lucky (1927), Creoles (1927), and Show Boat (both the road company of the original production, 1928, and the 1932 Broadway revival). She also danced in the chorus at the Cotton Club, and sang on Black Swan Records.

In 1929, she married Charles Buchanan who ran Harlem’s Savoy Ballroom (which, unlike the Cotton Club, was not segregated). She retired after Show Boat, and focused on being the wife of this prominent member of the community. As such she was highly visible in Harlem’s social scene. Gradually she became political. In 1949 she participated in Gov. Herbert Lehman’s Senate campaign. A good friend of Josephine Baker’s, she was with her party on the night of the highly publicized walkout of The Stork Club in 1951. This incident also fueled her civic involvement. In 1954 she ran for office, becoming New York’s first African American Assemblywoman. A  Democrat, she served in the New York Assembly from 1955 through 1962). After this, she switched parties, leaving the Assembly and supporting Governor Nelson Rockefeller and Senator Jacob Javits, both Republicans, in their election campaigns. In 1963, Governor Rockefeller appointed her New York Commissioner of Human Rights, a position she held until 1968.