Billy Williams: The Man in the Velvet Suit 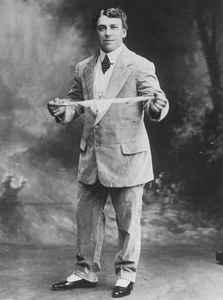 Billy Williams (Richard Isaac Banks, 1878-1915) was an Australian star of music hall, starting from around the turn of the last century.

Originally from Melbourne, Williams arrived in the UK in 1899, succeeding on the music hall stage with his renditions of chorus songs, and also appearing in pantos. His nickname was “The Man in the Velvet Suit”. 1906 was a crucial year for him; in that year he became a recording artist, releasing over 500 cylinders an disks over the next eight years. The same year, he sang his first songs written by Fred Godfrey (Llewellyn Williams, no relation) with whom he would have a particularly fruitful partnership starting around 1911. Godfrey’s tunes for Williams included such tantalizing titles as “We’re All Waiting for a Girl”, and “Let’s All Go Mad”.

Godrey’s peak years as a tunesmith were to be the World War One period, by which time, Billy Williams had unfortunately passed. His early death in 1915 at age 37 was officially chalked up to sepsis, although some have theorized that he had come down with a common theatrical malady (syphilis).

To learn more about vaudeville and music hall, please consult No Applause, Just Throw Money: The Book That Made Vaudeville Famous,