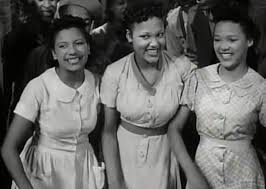 This post is one of a series honoring Black History Month.

Betimes we have had occasion to back into a subject rather than proceed in the customary direction. Thus we have written about Ruby Dandridge, mother of Vivian (1921-1991) and Dorothy Dandridge (1922-1965) prior to her more famous progeny. At any rate, it made chronological sense, even if it was less than savvy from the perspective of foot traffic!

The Dandridge girls were multi-talented. They began performing throughout the Deep South in black vaudeville as “The Wonder Children” in the late 1920s. Starting out in Cleveland, Ohio, they moved to Los Angeles in the early ’30s and began to take dance classes. A third friend Etta Jones (b. 1919) was added to the act, and, counterintuitively, at this point the act was renamed the Dandridge Sisters.After winning a local L.A. radio talent contest, they rapidly got pretty big, and started playing theatres and nightclubs around the country,  most notably New York’s Cotton Club, where they were headliners. Movies followed. While Vivian had been an extra in King Kong (1933) and Dorothy in the Our Gang short Teacher’s Beau (1935), they appeared together in  The Big Broadcast of 1936,  A Day at the Races (1937), Easy to Take (1937), It Can’t Last Forever (1937), Going Places (1938), Snow Gets in Your Eyes (1938), and Irene (1940). In 1939 they played the London Palladium with Jack Durant. During their last stretch as a trio, they sang with the Jimmie Lunceford Orchestra, in live performance and radio, and they cut four sides with the band.

The three split up in 1940 to pursue solo careers. Of the fate of Etta Jones, nothing is known. The girl who’d performed with the Dandridge Sisters is not the same as the better remembered jazz singer by that name (1928-2001).

Though she was the senior of the two biological Dandridge Sisters, Vivian fared less well than Dorothy on her own. In films she was usually an extra or an unbilled dancer. You can see her in Road to Morocco (1942), Star Spangled Rhythm (1942), Cabin in the Sky (1943), I Walked with a Zombie (1943), Stormy Weather (1943), I Dood It (1943), The Desert Song (1943), A Song is Born (1948), and Bright Road (1953). Her voice can be heard in the animated shorts Coal Black and de Sebben Dwarves (1943), and Goldilocks and the Jivin’ Bears (1944). Almost all of these parts were uncredited. In 1955 she went into the Broadway revue Ankles Aweigh as a replacement act. After this, for a time, she sought work in France. In 1968. Vivian released an LP called The Look of Love that didn’t do much to revive her career. After this she used the name Marina Rozell and largely retired from public life.

The visually striking Dorothy fared far better, with many more roles in films, ranging from bit parts to specialty numbers to leads, from race films to big budget Hollywood. Today she is best known for being the first African American woman to be nominated for a Best Actress Oscar, for her performance in Carmen Jones (1954). The role of Bess in the 1959 version of Porgy and Bess runs a close second. Among her over two dozen other films some notable ones included Drums of the Congo (1942), Hit Parade of 1943, Atlantic City (1944), and Bright Road (1953). Her last finished film performance was in Malaga (1960). She also appeared frequently on television and in live performance. In 1958 she went into the recording studio and laid down several tracks that were not released until 1999, around the time of her HBO bio-pic Introducing Dorothy Dandridge, starry Halle Berry.

From 1942 through 1948 she was married to Harold Nicholas of the Nicholas Brothers. From 1954 through 1958 she had a then-clandestine interracial affair with director Otto Preminger, who had directed her in Carmen Jones. Hotel owner Jack Denison was her last husband, from 1959 through 1962.  In 1965, just prior to a New York singing engagement she was discovered dead in a hotel room from an apparent overdose of barbiturates. She was only 42.

To learn more about vaudeville, consult No Applause, Just Throw Money: The Book That Made Vaudeville Famous