The Comedies of Ann Sheridan 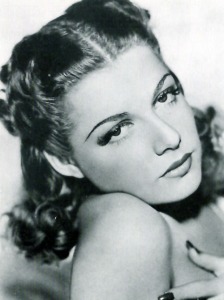 I’ll wager most think of Ann Sheridan (1915-1967) primarily as a pin-up girl and noir dame. In fact the whole reason she got into movies and plucked from teenaged obscurity in Texas was that her sister sent a photo into a contest sponsored by Paramount in 1934. And just like that she was “discovered”. Not to mention being named as the Warner Brothers “Oomph Girl” in 1939. And all of those hardboiled movies she appeared in, opposite Humphrey Bogart, James Cagney, George Raft, and the like.

But (not unlike Veronica Lake) part of Sheridan’s appeal was her way with delivering a funny, snappy line, dryly, with a kind of arch poise. It’s a very “forties” thing. easily translatable to screwball, its sister genre. At any rate, comedy and vaudeville being our bailiwick, we thought we’d mention some of the classic and not-so-classic comedies and show biz confections Ann Sheridan appeared in. By the way, her real first name was Clara Lou. The screen name Ann was taken from Harold Lloyd’s The Milky Way.

In her early Paramount days, Sheridan was an extra. During that period you can see her in Murder at the Vanities (1934), the original version of The Lemon Drop Kid (1934), Mrs Wiggs of the Cabbage Patch (1934), College Rhythm (1934) with Joe Penner and Jack Oakie, and Mississippi (1935). Then things started to get cooking at Warner Brothers. She’s in no less than three Dead End Kids movies (1938-39), Naughty But Nice (1939) with Dick Powell, Winter Carnival (1939), Kaufman and Hart’s The Man Who Came To Dinner and George Washington Slept Here (both 1942, the latter opposite Jack Benny), the Nora Bayes bio-pic Shine On Harvest Moon (1944), Howard Hawks’ classic I Was a Male War Bride (1949) opposite Cary Grant, the comedy western Take me to Town (1953) and the musical The Opposite Sex (1956) with June Allyson, Ann Miller, Joan Collins, and Leslie Nielsen.

In the ’50s she worked mostly in television, culminating in her last project, a western themed sitcom called Pistols ‘n’ Petticoats, which ran from 1966 through 1967. Sadly, Sheridan died of cancer midseason. But as you see, her last statement was a comical one.

To find out more about the history of show business, please see No Applause, Just Throw Money: The Book That Made Vaudeville Famous, and for more on classic comedy, read Chain of Fools: Silent Comedy and Its Legacies from Nickelodeons to Youtube,