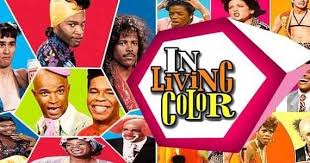 The bulk of our content here has to do with “classic” show biz, but ya know? In Living Color is now 30 years old — I hear younger people using to hear the word “classic” to describe all sorts of stuff I thought just happened yesterday. That this show was groundbreaking and historic there was never any doubt. Now it has the added cache of being old.

For decades I’ve carried around a small amount of guilt about knowing next to nothing about the hip hop of the past three decades. But I realized a couple of things the other day that consoled me. For one, I know next to nothing about ALL the music of the same time period! Why should hip hop be any different? And more importantly during this period I was an avid consumer of African American COMEDY, and as comedy is supposed to be my thing anyway, I have more than done my due diligence in that area, not that it was remotely a chore. The late ’80s/ early ’90s was the era of Spike Lee’s emergence, the Kid ‘n’ Play movies, Roc, Martin and Sinbad. On the more reactionary side, Eddie Murphy, Cosby, Arsenio, and The Fresh Prince of Bel-Air. On the more radical side there was the Def Comedy Jam. And I DID stay on top of this stuff regularly, and was a fan of it, none more so than the comedy variety program In Loving Color (1990-94).

In Living Color was the baby of Keenan Ivory Wayans, who’d been in Robert Towsend’s Hollywood Shuffle (1987), and who’d written, directed and starred in the hilarious blaxploitation parody I’m Gonna Get You, Sucka (1988). In Living Color was a tent pole in the schedule of the fledgling Fox Network, only a few years old at the time of the show’s premiere (three years since the hard launch; five years since the tentative soft launch). Fox competed with the much more established Big Three networks (ABC, CBS, NBC, all of which had been started back in the days of radio), by providing maverick programming which the conservative giants never dared. Fox had kicked off with a late-night talk show starring potty mouthed comedienne Joan Rivers, followed with the zany, mercurial The Tracey Ullman Show, the fist-pumping Arsenio Hall Show, and their line-up now included the aggressive satirical anti-sitcoms The Simpsons and Married…With Children, the latter of which was the lead-in to In Living Color. On Fox, expectations and received wisdoms were turned on their heads. I’m not saying it was all “intellectual” or “progressive” — often far from it. But it frequently felt experimental and untried and it made for loyal viewing, at least on my part.

In Living Color impressed less with groundbreaking political content of the sort one might expect given Wayans’ two then-recent movies, but more by virtue of its excellence. The show exuded a confidence; it was not timid. If it went into some controversial content area, it just went, without apology. It made fun of everything, black culture as well as white, and this felt new. A stand-out memory was a parody of a Colt .45 commercial; they dared ridicule a product whose key market was the same as the show’s audience, and not in a complimentary way. Sometimes they crossed the line as in the “Men On…” sketches, which have been called homophobic. But the show’s boldness overall felt like a virtue; it never would have happened on the Big Three.

I often think: this show was so confident about what it had to offer that its token white guy was JIM CARREY. A primarily African American show might have been forgiven for pulling a “Lyle Waggoner“, i.e. casting some mannequin to play the requisite white dude in comedy sketches (Waggoner had been the straight man in sketches on The Carol Burnett Show; a sort of latter day Zeppo). But Carrey was not hampered or impinged upon in any way; he was allowed to shine to the best of his abilities, was certainly one of the stars of the show, providing a springboard to a more high profile movie career. And, good as he was, he STILL did not steal this show. (His best remembered character from the show was Fire Marshall Bill, an old dude with burns all over his face who shared terrible safety tips and got mangled and cooked as a result. I also remember him playing a hilarious Joey Buttafuoco).

As is well known, the core of the show’s company was provided by the Wayans family: Keenan and siblings. Generally, my happiest, funny memories are associated with his brother Damon (who played Homey the Clown), but there was also his sister Kim, younger brothers Shawn and Marlon, and an older brother Dwayne, who was sometimes an extra. Of the other cast: David Alan Grier was already known to me when the show premiered; he was like an actor actor (as opposed to just a sketch comedian); he’d been in movies like Streamers (1983) and A Soldier’s Story (1984). Jamie Foxx, whom I remember best for his outrageous “Ugly Wanda” drag character, was also to prove himself in serious drama, eventually winning an Oscar for his performance as Ray Charles in Ray. The other major cast members were T’Keyah Crystal Keymáh (Crystal Walker) and Tommy Davidson.

Another highly impressive element of the show was the presence of The Fly Girls, a resident dance-chorus. This was an ingenious twist on an age-old tv variety staple. Jackie Gleason’s variety show, for example, had had the June Taylor Dancers, back in the ’50s and ’60s. Naturally In Living Color updated the concept, and the Fly Girls’ moves were hip-hop and performed to the accompaniment of a DJ. The choreographer was Rosie Perez, and futurely-famous members of the company included Jennifer Lopez and Carrie Ann Inaba.

Another twist on “old school” was the show’s very title. Back in the day, the phrase was used to accompany the NBC peacock logo, in the days when color television was new and special. Naturally, the new twist was that In Living Color’s cast was primarily made up of People of Color. That the band Living Colour had just broken big in 1988 caused some confusion and rivalry (and a lawsuit) in the early days. Nowadays, the show’s title has yet another added twist. See the photos above. The late ’80s and early ’90s were definitely a time of exploding colors in clothing fashions, and so forth, not just Afrocentric patterns as in the photo immediately above, but check out THIS: 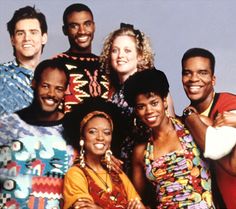 In Living Color had a good run, five seasons, although network interference eventually resulted in the departure of the main stars and the show’s eventual cancellation. But not before it made history and some highly entertaining television.

To find out more about the variety arts, including television variety, please consult No Applause, Just Throw Money: The Book That Made Vaudeville Famous,