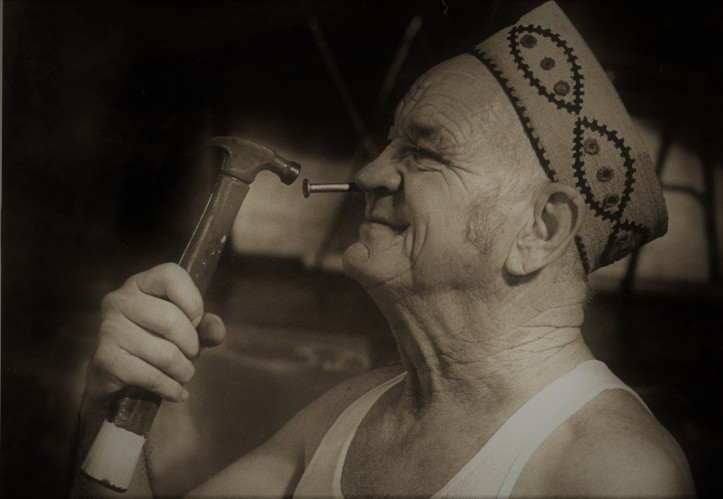 Today in 1907 was born the late sideshow eminence Melvin Burkhart. I was about to call him a “sideshow giant”, but of course there are literal sideshow giants, so calling Burkhart one would just confuse things. I’ve been reluctant to write about him thus far because many friends and colleagues knew him, worked with him, and learned from him, but I never had the privilege and haven’t wanted to step on anyone’s toes. But Burkhart has been gone for 18 years now; he’s part of history, and leaving him out of these annals would be a bigger crime than getting him wrong.

Burkhart was best known for his Human Blockhead act (in fact, he is generally acknowledged to have created that performance category), but he was also skilled at sword swallowing, fire eating, contortionism, magic, and the electric chair routine. Born in Atlanta, he spent most of his childhood in New Orleans, and then moved to Louisville as a teenager. In 1927 he joined Mr. Leroy Easter’s Traveling Family Circus, experience that helped him get a job with Ringling Brothers seven years later. He also worked at Ripley’s Odditorium, Hubert’s Dime Museum, and the 1939 World’s Fair. For over 30 years he was affiliated with James E. Strate’s carnival and was the main attraction of their sideshow.

As for his act: if you’ve seen any contemporary sideshow act, in large part they are likely doing at least some of Burkhart’s material. The Human Blockhead business came to him after he’d broken his nose as a boxer and observed how, if you were stout of heart, you could shove things very far into your nasal cavity: nails, spikes, drill bits, you name it. So he did — with panache and flair. He also billed himself as “The Two Faced Man” because he could make different expressions on the opposite sides of his punim, and “The Anatomical Wonder” because he could do Indian Rubber Man Stuff.

Burkhart’s last years were performing spent at Coney Island USA; he is now immortalized in their Sideshow Hall of Fame. I can’t help but derive personal meaning from the fact that he died on November 8, 2001: that was my birthday, two months after September 11. My crummiest birthday just got crummier!