February 1 is the birthday of Clark Gable (1901-1960).  Gable’s career was broad-ranging and diverse, but, as I’ve done with several other male stars in the past, today I thought I would just focus on one area of his output: westerns. Given the fact that Gable had spent part of his youth in Oklahoma managing horses, and later owned his own working ranch in Hollywood, you’d think he would have made many more westerns than he actually did, which was just a handful. He often did pictures with rugged, frontier-like settings, such as Red Dust (Indochina) and The Call of the Wild (Alaska), only a few are westerns per se, set in the American west. At any rate, we’ll get to other Gable fodder like It Happened One Night (1934) and Gone with the Wind (1939) in some future post. meantime, here are Gable’s principal oaters:

William Boyd (soon to be Hopalong Cassidy) is the actual star of this B movie, about a pair of ex-partners feuding over water rights in the titular Arizona desert. This is Gable’s first talkie, he plays a drifter hired as an enforcer to protect one of the character’s land. He turns out to be a trouble making bad guy. He made such an impression in the role, stardom grew out of it. Helen Twelvetrees and William Farnum are also in the cast. The comic relief character, an old drunk, is played by Al St. John from silent comedy days.

We bend the rules a little to make this a western. It is much more of an early disaster movie, and an excellent one at that. It’s set against the backdrop of the San Francisco Earthquake of 1906. But this Barbary Coast setting only seven years into the 20th century puts it mighty close to the time and place of many a proper western, and surely the costume and set designers knew didn’t do much nitpicking about making the movie look UNlike a western. Gable plays a saloon keeper. Spencer Tracy plays his old friend, a priest, and then-popular Jeanette MacDonald is a singer hired to perform in the saloon. Ted Healy provides comic relief and Al Shean (the Marx Brothers’ uncle) plays the piano player. Soon it all turns to rubble, and Gable emerges a hero, though sinner he remains. 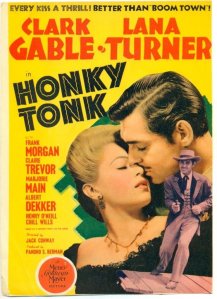 Gable plays a clever con man with a secret heart of gold. It starts out with an amazing scene where Gable and his cohort (Chill Wills) are about be tarred and feathered for conning everyone—and he cons his way out of the lynching with a game of three card monte! (and a seized gun). He then goes to a Nevada town, with a notion of getting respectable but really only to work the long con: heading up a crooked political machine. He does it right away, as though it were no more involved than deciding to do so. First he tricks the owner of the local casino out of $5,000 with a rigged game of Russian Roulette. He takes over the casino, starts a church, etc. Meanwhile, he falls for the upstanding daughter (Lana Turner, against type) of the town judge, Frank Morgan, whom, unknown to her, is also a con man. She tricks Gable into getting married. Up until this point the film has seemed like a light comedy. Then it gets heavy. Time passes. Gable and Turner have a fabulous mansion—quite a fantasy given the time and place. But Morgan hates the marriage and hates the set-up and wants blown the whistle on the crooked operation. The whole town is angry at Gable. He seems primed to be lynched yet again. At a town meeting, Morgan tries to spill the beans and is shot by a lackey of Gable’s. Turner, who is pregnant, loses the baby and almost dies. Gable talks his way out of another lynching and blows town. Epilogue: Turner follows Gable to that next town. Others in the cast include Claire Trevor and Marjorie Main.

A historical epic directed by William Wellman, based on Bernard DeVoto’s non fiction book about fur trappers. Gable is at the center of an all star cast that includes Ricardo Montalban and J. Carrol Naish as rival Indian chiefs, Adolphe Menjou as a French trapper, Alan Napier as an army officer, George Chandler as Napier’s aide-de-camp, and James Whitmore as “Old Bill”. Narrated by Howard Keel.

Gable is given the task by ex-President Andrew Jackson ( Lionel Barrymore, in his last role) of whipping up support for the annexation of Texas by the United States. Broderick Crawford is the villain who uses force to oppose the process. Ava Gardner is the local newspaperwoman and (obviously) love interest. Beulah Bondi and Ed Begley are also in the cast.

Gable and Cameron Mitchell play brothers, former bushwhacking outlaws. Robert Ryan a slick hustler who hires them to manage a cattle drive from Wyoming to Texas. The film’s fairly run-of-the-mill conceit is that he, the “legitimate” one, is crooked, and they are the real good guys. We get a taste of that when, en route, they see evidence of Indians and Gable is the one to go back to rescue some people they met earlier on the trail. When he arrives, the only one left is Jane Russell–tough luck!  At first she and Gable share a romance until she learns that he’s not the ambitious type, he merely wants to start a ranch. Meanwhile Ryan wants to “own” Wyoming. Gable leaves her, she becomes Ryan’s whore. The rest of the movie is a long cattle drive, with different little boring misadventures along the way. Ryan tries to screw the others over. Gable takes HIS at gunpoint, but just what he’s owed, not a dollar more. Inexplicably, the previous gold-digger Russell is waiting for Gable in his wagon after all at the end of the picture. Directed by Raoul Walsh.

Like The Tall Men, this one was directed by Raoul Walsh. Unlike that one, or any other picture, this one was produced by gable himself, through his company GABCO. He found that he didn’t like producing, and never assumed that role again. While this one has a western setting, it’s also a bit of comedy. Gable plays a dashing dude who learns a fortune is buried on the property of four beautiful widows, one of whom is Eleanor Parker, and a horrible mother-in-law, (Jo Van Fleet). Gable’s task: to sweet talk those ladies, so he can get the dinero! Jay C. Flippen plays a bartender.

Many would protest my including this movie among westerns, but it truly does comment on the genre. Gable, Eli Wallach and Montgomery Clift play modern day cowboys, who round up wild horses for dog food. Marilyn Monroe plays a sensitive young woman who has a problem with that! It was of course written by her then-husband Arthur Miller.The film was Miller’s one attempt to “go Hollywood” but he also seems to be exploring territory that one thinks of as being more Williams’ or Inge’s. It’s got outdoorsy characters, AMERICAN Americans, and an emphasis on personal relationships. The characters are all sad and lonely, as in Williams, but of course Miller ties it in to the greater social context. The West has vanished, but this trio of men, each in his own way, is still trying to live as though it hasn’t and has consequently become a “misfit”. From hundreds of wild horses to be rounded up on a nearby mesa, there are now only six. The rest have become dog food…a far cry from the more elevated role the horse once played in our society. As the girl all three of the men love, Monroe is also an outcast in modern society, for the opposite reason. She is sensitive…almost a sort of flower child. She hates violence, and yet it’s all around her. She hates to watch the Montgomery Cliff character get thrown during the rodeo, hates to see the horses rounded up, etc.  This was the last movie completed by both Gable and Monroe. 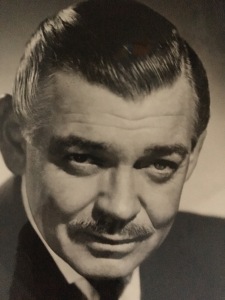