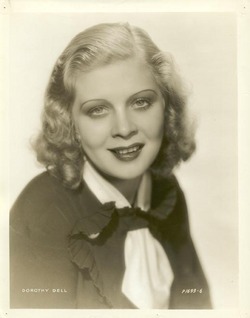 I’ve encountered many biographies of stars whose careers rose rapidly and whose lives ended abruptly, but few this rapid or this abrupt.

Dorothy Dell (Dorothy Dell Goff, 1915-1934) was born into local society in Hattiesburg, Mississippi, moving to New Orleans with her family when she was ten. Her childhood friend was Dorothy Lamour; they both embarked on their show business careers together. Pleasing to both the eye and the ear, Dell started out singing on radio and participating in beauty pageants. Dell won Miss New Orleans in 1930; the following year her friend Lamour would take the title.

Still only 15, Dell next embarked on a vaudeville tour with Fanchon and Marco for 32 weeks in 1930. Next came the Ziegfeld Follies of 1931, in which she sang the song “Was I (Drunk)” and was featured as Miss Universe in the “You Made Me Love You” number. In a bit of ominous foreshadowing, she was was invited to the same Harry Richman yacht party with Mark Hellinger, Gladys Glad, Virginia Biddle, and Helen Walsh. There was an explosion on the boat. Walsh was killed, and injuries forced Biddle to retire from dancing. If Dell had attended she might have suffered a similar fate. But her reprieve didn’t last long.

After the five month Broadway run of the Follies, she toured with the show into 1932. That year she also made her first film, a musical short called Passing the Buck. Then came another Ziegfeld show Tattle Tales (1933) where she sang the songs “Breaking Up a Rhythm” and “Sing American Tunes”.

Next came Hollywood and instant stardom with Paramount. Her first feature was Wharf Angel (1934) a tale of the Barbary Coast with Victor McLaglen and Alison Skipworth. Then came Little Miss Marker with Shirley Temple, and Shoot the Works with Jack Oakie and Ben Bernie, all that same year. Her recording of the song she sang in the latter picture, “With Me Eyes Wide Open, I’m Dreaming” became a hit. It appeared she could do no wrong. Her next picture was slated to be Now and Forever with Temple and Gary Cooper.

Then in June 1934, all the good luck ran out. Dell was returning home from a party with a Dr. Carl Wagner (20 years her senior) when Wagner lost control of the car on a mountain road, totaling it. Dell was killed instantly, Wagner died of his injuries a few hours later. Dell was only 19 when she died, and clearly on the way up. Carole Lombard took over her role in Now and Forever. A few years later, Lamour took her younger sister Helen Dell under her wing. Helen appeared in George White’s Music Hall Varieties (1932) and Yokel Boy (1939)

It’s often given out that at the time of her death Dorothy Dell was engaged to marry a caricaturist named Nat Carson whom she met while appearing while performing with Earl Carroll’s Vanities.  This excellent and detailed timeline of her life omits those items however, and I have not been able to find corroboration for her appearing in the Vanities anywhere. She may have been with a touring edition. It’s not outside the real of possibility. For much more on the short life and tragic end of Dorothy Dell, see this article on Immortal Ephemera.