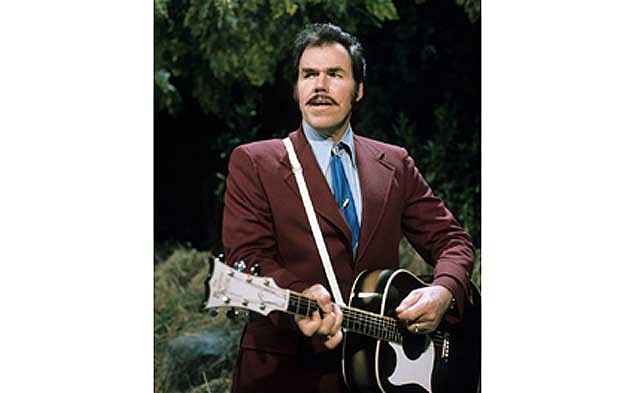 Sometime in the middle of the 1970s, to everyone’s delight, a direct marketing TV advertising campaign appeared out of nowhere hawking the records of a yodeling country singer named Slim Whitman. And, well, timing is everything. American culture was in a pretty cynical place. The economy was chronically illing. Problems like poverty, crime and drug abuse only seemed to be growing, Most pop music, film and television seemed to take a hedonistic approach to dealing with it all, which is to say not dealing with it. We were pretty much enjoined constantly to dance and get it on. To pluck a song at random: KC and the Sunshine Band’s “That’s the Way (Uh Huh, Uh Huh) I Like It” pretty much expresses the attitude of the decade.

And then suddenly this TV commercial hits the airwaves hawking the records of this singing cowboy from some other decade, possibly some other planet, claiming that he’d “sold more records than Elvis or The Beatles“. This was coupled with the cognitive dissonance produced by the samples of his actual songs, things like the title song from the 1924 operetta Rose Marie, and a cover of the ultimate campy hit “Paloma Blanca”. And a universal roar of laughter went up throughout the land. “THESE are his hits? We’ve never heard them! We never heard of him! And he couldn’t possibly be less in tune with what’s actually popular at the moment, or what’s been popular for several decades for that matter! Plus he’s weird and hilarious looking!” And so Slim Whitman was a punchline, and sort of remains one to this day, insomuch as he is remembered. 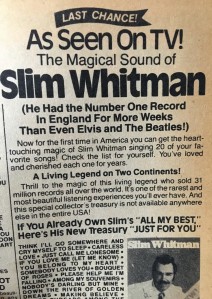 In retrospect, I think, part of the blame for the reaction of ridicule must be laid at the feet of the campaign, which seemed to pretend that the real world didn’t exist. But, to play devil’s advocate, the target market was undoubtedly older people, the advertisers just happened to catch the rest of us up in their net.  Here’s the thing, though, a shocking truth, today’s bombshell. SLIM WHITMAN IS NOT A JOKE. He was undoubtedly a throwback — he didn’t even sing contemporary country, which was enjoying a sort of Renaissance at the time. Whitman sang the old fashioned country and western music of the 30s and 40s, songs popularized by the likes of Gene Autry and others. This coupled with antiquated pop standards of the type heard on The Lawrence Welk Show. All that is true. But what is also true is that Slim Whitman had many many hit records — just not on the U.S. pop charts. Between 1949 and 1981 he had songs near the top of the U.S. country charts in all but a couple of years, And he had a half dozen major hits on the U.K. pop charts (“Rose Marie”, 1954 was the #1 song his marketing people used to make his claim about selling better than Elvis). And the Beatles themselves were fans.

Further, Whitman did have one hit single on the U.S. pop charts, and it’s a cool one. His version of “Indian Love Call”, again from the musical Rose Marie, went all the way to #9 in America in 1952, and furthermore, it’s cool! It’s a cool record! And if you’ve seen Tim Burton’s Mars Attacks you even know it — it’s the song that kills the aliens, making it the all-time most epic Slim Whitman joke.

But as we say, Slim Whitman is not a joke — it’s all a question of perspective. As I write this now, I find myself mostly interested in him and open to genuinely enjoying his records. To be fighting such a rear-guard cultural battle SO LATE. Performing un-ironic renditions of “Tumblin’ Tumbleweeds” when the Sex Pistols were around!

Otis Dewey Whitman Jr (1923-2013) was born and died in Florida. Sometimes, in the early years, he went by “O.D.” Today I invite you to take yourself over to Youtube, and — like the martians — O.D. on Slim Whitman.