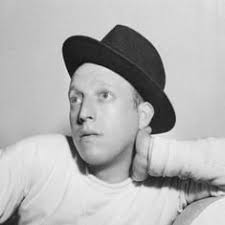 Brooklyn-born Sid Silvers (1901-1976) got his show business start in the early 1920s as the vaudeville stooge to comedian and accordion player Phil Baker, interrupting the act with comic business from the audience. Their relationship became the model for the 1951 Martin–Lewis vehicle The Stooge, which Silvers wrote the story for. In addition to vaudeville, Baker and Silvers appeared in the Broadway revues Artists and Models (1925) and A Night in Spain (1927), and Silvers contributed song material to the latter show. The pair went their separate ways in 1928.

From this point, Silvers worked both as a performer and a writer for both stage and screen, bouncing around between the jobs. He wrote lyrics for the Broadway musicals The Songwriter (1928) and Pleasure Bound (1929); appeared in the motion pictures Show of Shows (1929), and Dancing Sweeties (1930); then co-wrote two movie shorts with Herman Ruby: The Sultan’s Jester and What a Life, and was one of the writers on the movie musical Follow the Leader (all 1930); then wrote the book for the Broadway musical You Said It (1931); appeared in the musical Take a Chance (1932), for which he also wrote dialogue (it was made into a film the following year); appeared in the film My Weakness (1933); appeared in and co-wrote the movie Bottoms Up (1934); appeared in the movie Transatlantic Merry-Go-Round (1934); wrote some of the dialogue for Wheeler and Woolsey’s Kentucky Kernels (1934);  appeared in and co-wrote the films Born to Dance (1936) and Broadway Melody of 1936; co-wrote and appeared in the movie 52nd Street (1937); either co-wrote or contributed dialogue to the films Broadway Melody of 1938, The Gorilla (1939), The Wizard of Oz (1939), Broadway Melody of 1940, The Fleet’s in (1942), For Me and My Gal (1942) and Girl Crazy (1943); conceived the Broadway musical High Kickers (1941); and acted in Mr. Ace (1946) his last film. For much of the 1940s and 50s he concentrated on performing in nightclubs and on radio. Then he appeared on the Milton Berle’s TV show Texaco Star Theatre (1949). In 1951 he co-wrote the films The Stooge and Two Tickets to Broadway. He contributed a song to the Broadway show New Faces of 1956. His last professional credit was writing for a Mickey Rooney TV special in 1960. How’d he keep it all straight? When he passed away in 1976 he was back home in Brooklyn. He’d had quite a ride in between.

To find out more about  the history of vaudeville, and stars like Sid Silvers, consult No Applause, Just Throw Money: The Book That Made Vaudeville Famous