Gladys Blake: Talked for 20 Years, Then Shut Up

Orphaned shortly after her birth, Blake was raised by two aunts in Virginia and Maryland. At 14 she ran away to go into show business. She performed with stock companies and circuses, but within a couple of years she met Lee Gresham with whom she formed the vaudeville act Gresham and Blake. The pair were later married. 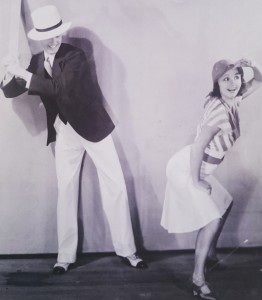 Judging by her usual screen character, I get the sense that Gresham and Blake was a “Dumb Dora” crosstalk act in the mold of Burns and Allen and Block and Sully. As a team, Gresham and Blake were performing in nightclubs as late as 1937. And they were definitely a Big Time act. It was while performing at the Orpheum in Los Angeles that Blake was spotted by movie scouts and began to get screen work. Her first three films were Mack Sennett shorts in 1933: Don’t Play Bridge With Your Wife, The Plumber and the Lady and The Rummy. Later comedy shorts included Air Fright (1933) with Thelma Todd and Patsy Kelly, and Love in September (1936) with Jackie Coogan.

Blake’s early retirement (age 42) is a little mysterious. She may have gotten discouraged by the fact that she was working mostly as an uncredited extra at that time, where in the early years in films like Racing Blood (1936) she had gotten as high as third-billed. Oddly she seems never to tried television, a natural next step, and a godsend for work for many established performers of her generation. As it happened, she would live another three decades out of the limelight.

To find out more about  the history of vaudeville, and performers like Gladys Blake, consult No Applause, Just Throw Money: The Book That Made Vaudeville Famous