Those who know Booke only as “Boss Hogg” will be startled by aspects of his background. He’s a Yankee from Buffalo, and was educated at Yale. He played Albany in Orson Welles’ 1956 production of King Lear. He replaced Tom Bosley in the original Broadway production of Fiorello! His movies include Black Like Me (1964), Fail-Safe (1964), What’s Up Doc? (1972), Slaughterhouse-Five (1972), The Iceman Cometh (1973) and the Disney pictures Freaky Friday (1976) and The Cat from Outer Space (1978). But mostly he did tons of television, including two episodes of M*A*S*H, several of All in the Family, two of Columbo, and dozens and dozens of other shows. Booke’s was a well-known face long before he ever arrived at Hazzard County.

We choose the day to write about The Dukes of Hazzard (1979-85) because surely Boss Hogg was the primary reason anybody ever watched The Dukes of Hazzard, wouldn’t you agree? I ask it as an open-ended question, for even as a teenager I would never watch The Dukes of Hazzard on purpose — and I had rural Southern roots. The show was widely regarded as a new high water mark for the boorish and the dumb in television, and whenever I caught a few minutes of the show I found that reputation to be justified. Yet it was a hit and it made an impact, and now that it is in our rear view mirror it is easy to identify as a turning point. 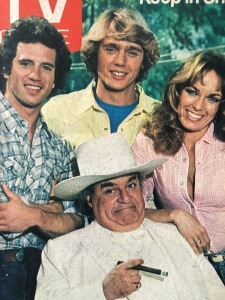 So we’re continuing a theme here, one we touched on recently in posts on Burt Reynolds, the trucker/CB radio genre, and the sitcom Carter Country, among others. It was a moment of pop cultural counter-revolution, when a certain portion of the population, apparently tired of a decade or two of the entertainment world’s promotion of civil rights and a variety of related causes, began to seek alternatives that celebrated what they already were rather than what they could be. That message was cooked right into the theme song by Waylon Jennings: “Just the Good Ole Boys, never meanin’ no harm…” It seems a pivotal moment to me, for it was only in the decades after this that country music itself seemed to shift. I’m a huge fan of traditional (pre-1980) country, but whenever you listen to the contemporary variant, it all seems to have this weirdly aggrieved, defiant and defensive tone on the order of, “No Yankee’s gonna tell me I can’t ride around in my pick-up truck!” It has a PARANOID tone, fearful of pernicious forces that are supposedly out to exterminate a certain way of life. If the way of life you refer to is institutionalized racism, including flying the flag of a renegade and illegitimate government that fought a traitorous war against the United States, i.e., the Confederacy, you’re fuckin’ right, bub. But nobody decent has a problem with your job or your truck or your hat, or whatever else you think someone is coming to take away from you. 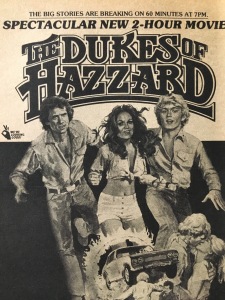 So there’s this tone of being unfairly mistreated. By whom? It’s in the song. “The Law”. Both the song and the show are in old folk tradition of the outlaw ballad (I was about to stipulate “American tradition”, but it actually predates that — Robin Hood is the most famous example). The Duke boys (Tom Wopat and John Schneider) and their Uncle Jesse (Denver Pyle) are moonshiners, or former moonshiners on probation. And so The Law is their enemy, and they’re forever evading it, in their glamorous NASCAR looking, Confederate flag-flying hot rod that is forever leaping over gullies in slow motion like a gasoline-powered stallion. As we mentioned in our trucker piece, this was an entire cinematic subgenre in the 1970s, and The Dukes of Hazzard was specifically modeled by creator Gy Waldron on his 1975 film Moonrunners. And naturally in this scenario, the Law is both crooked and incompetent, represented by Boss Hogg and his stooges Sheriff Rosco (James Best) and deputies Enos (Sonny Shroyer) and Cletus (Rick Hurst).

I’ve got Southern moonshiners in my family tree, but even if I didn’t, such a set-up would command a certain amount of sympathy from me. People need to make a living and the state is often an encumbrance (sometimes a brutal and corrupt one) when it comes to that, with its taxes, laws, codes, and outright prohibitions. But…well. Sometimes they’re inconvenient, but most laws exist for a reason. There’s a reason “bonded whiskey” became a prized thing. The mark of quality is preferable to rotting your guts out. Traffic rules exist so that we don’t all kill ourselves in a demolition derby. But, especially over the last few decades, America has evolved an entire outlaw culture. In recent decades the heat was turned up by Ronald “Government is the Problem” Reagan, continued in the ’90s with all manner of militias and armed cults and anarcho-terrorists like Timothy McVeigh, then the Tea Party, and now we have reached the point where we now have a blatantly obvious gangster President, a man who couldn’t obey any law made by God or man to save his life. And millions of Americans seem to have been conditioned to be more than thrilled with that. You know what does that? Culture. Pop culture. The pump has been primed for Trumpism for decades; some of his followers have been getting the message hammered into them since the cradle. They see enemies wherever they turn, and they seek to rid themselves of those enemies, and they don’t care how they do it. “Meaning no harm?” You’re causing a great deal of harm, indeed.