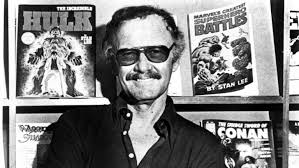 Yes, even I mourn the passing of Marvel Comics founder and master Stan Lee, who passed away today at the age of 95. And this wasn’t like our usual 95 year olds, who last did a lick of work 30 or 40 or 50 years ago…Lee was active until like 5 minutes ago. He was part of the present — he was was part of the present my entire life!

My peak interest in his work was when I was 13 years old (1978-79), and for two or three years there, I was fairly obsessed, like a lot of kids my age, with the universe he created. While I occasionally bought new issues of his comics off the newsstands, I was MOST interested (almost exclusively) in the early stuff, from the early 1960s, which I would read in reprint editions and paperback books. As a consequence (for example), I was really into the original X-Men, and knew (and still know) next to nothing about the contemporary X-Men comics being released in my own era. (The ape-like “Beast” was my favorite mutant hero). Above all, I liked the very spacey, esoteric ones with elements of the supernatural and grandiose metaphysical pretensions, especially Dr. Strange, the Sub-Mariner, the Silver Surfer, Ghost Rider and Thor. Spiderman was always the most successful even though this was well before the popular films…there was a daily strip in our newspaper…and he was on The Electric Company! And The Incredible Hulk was temporarily Lee’s most high profile antihero in those years, due to the popular TV show. And when She-Hulk debuted in 1980…let us say I was just the right age and the right demographic to bestow maximum appreciation upon the spin-off.

Antihero is the right word, yeah? Which probably explains the intense bond adolescents formed with his characters. Truth be known, I was always more of a D.C. man throughout most of my childhood. But the years of puberty, those were the peak years of interest in Marvel, with its brooding, solitary, alienated, misunderstood superpeople who somehow managed to feel “less than”. Stan Lee’s comics had more melancholy soliloquies than Shakespeare.

Like a lot of teenagers, inspired by Lee and others, I had my own drawing board, tee square, and ink pens, and used to draw my own comics. Most of what I did were one-panel joke comics in the style of B. Kliban, but I also created my own Marvel style superhero team based on the signs of the zodiac (little realizing that had been done countless of times before. Everything has).

Lee was always a welcome, cheerful presence in his own comics, hovering over the whole thing much as Alfred Hitchcock or Rod Serling had over their TV shows. (With a little Hugh Hefner thrown in; he always seemed a bit of an Oily Dude to me, with his porn ‘stache, and tinted shades). How astounding and unexpected (really) was it when his entire empire didn’t die out in the 21st century but instead kicked into overdrive in the form of Hollywood film franchises so successful they’ve basically taken over mainstream cinema like one of his own soulless supervillains? I’ve only seen a few of them — maybe half a dozen. They’re not my thing. Though I jokingly mentioned Shakespeare above, by no stretch of the imagination (even Lee’s own) was Stan Lee a wordsmith or storyteller at the level of Shakespeare, although a lot of grown-ups seem to believe otherwise. Grown-ups should…grow. But when I was 13 I would probably have been a major enthusiast of the current crop of films. And when you’re 13…you’re allowed to be 13.